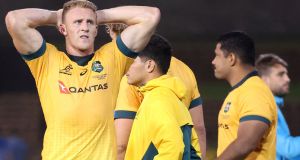 Nicolás Sánchez held his nerve with the boot as Argentina hit back from 15-6 down to claim a 15-15 draw against Australia in a Tri Nations Series encounter in Newcastle that had no tries.

Australia had plenty of territory and possession in the first half and even though they could not get over the try line, they established a nine-point lead just before the hour thanks to five penalties from outhalf Reece Hodge.

But Sánchez, who registered all of Argentina’s points, split the posts with three penalties, the last two from 45 metres away and into a head wind, as the spoils were shared at the McDonald Jones Stadium.

While Argentina were unable to discover the fluency that had seen them pull off a shock 25-15 victory over New Zealand last week, the Pumas were able to avoid a first defeat of the competition.

Australia will rue their inability to make their first-half dominance count but they had an opportunity to snatch victory two minutes from time, only for Hodge to fluff his lines with a 40-metre penalty kick from an acute angle.

All three teams in the competition move on to six points ahead of next weekend’s penultimate fixture, when Argentina take on the All Blacks at the same venue.