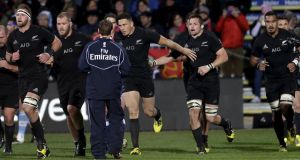 All Blacks celebrates a try against Argentina during their Rugby Championship match at AMI Stadium in Christchurch. Photograph: Anthony Phelps/Reuters

Outhalf Lima Sopoaga and lock James Broadhurst will make their All Blacks debuts against South Africa on Saturday after being named in the starting side for the Rugby Championship test on Thursday morning.

Coach Steve Hansen continued his project to build depth in all positions ahead of the World Cup defence later this year with Sopoaga and Broadhurst rewarded for fine seasons in Super Rugby.

Sopoaga’s halfback partnership with Aaron Smith helped the Otago Highlanders to their maiden title, while the athletic Broadhurst’s Wellington Hurricanes were losing finalists.

With Aaron Cruden likely to miss the World Cup because of a knee injury and Dan Carter rested, Sopoaga will have a chance to press for a spot in the World Cup squad ahead of Colin Slade, who drops off the bench to make way for Beauden Barrett.

Aaron Smith returns at scrumhalf and will be tasked with firing a backline that features two other Smiths in Conrad, who is reunited with Ma’a Nonu in the centres, and Ben, who starts on the wing.

Ben Smith comes in for the unfortunate Waisake Naholo, who suffered a leg fracture in the 39-18 victory over Argentina in Christchurch last Friday, and will play out wide to allow Israel Dagg more game time at fullback.

In a pack boasting 500 caps, Liam Messam replaces Jerome Kaino at blindside flanker, Luke Romano drops out of the matchday squad to make way for Broadhurst and Dane Coles gets the start at hooker in place of the rested Keven Mealamu.

The All Blacks are attempting to win a fourth successive title in this year’s truncated championship but Hansen said there would be no complacency ahead of one of the great fixtures in test rugby.

“It doesn’t get much bigger or better than playing South Africa at Ellis Park,” he said in a news release.

“Though we were happier with our game last weekend, there is a genuine desire to take it up a level.

“The Springboks will be desperate after their loss last week and we will have to better that desperation with our own urgency, intensity and accuracy in the execution of our game and skillsets.”

Meanwhile Australia coach Michael Cheika has made seven changes to his team for this weekend‘s test against Argentina, bringing Bernard Foley back at outhalf and giving David Pocock the start at openside flanker.

The Wallabies narrowly edged their Rugby Championship opener against South Africa in Brisbane last weekend and while Cheika lost three players to injury, he is clearly keen to take a look at a few more potential combinations in Mendoza.

Foley, who started 12 of Australia‘s 14 tests last season but was dropped for Brisbane, regains the number 10 shirt from Quade Cooper, who had a patchy outing against the Springboks.

“We are fortunate with the level of depth in the squad to be able to cover for the injuries we sustained last Saturday night against the Springboks,“ Cheika said in a news release.

“They all deserve their start against Los Pumas and they now have an opportunity to build on the performance last week and stake their claims.

“We have two fine playmakers in Quade and Bernard. Both players can make an enormous impact on our team.“

Nick Phipps replaces the injured Will Genia at scrumhalf, while Matt Toomua is rewarded for a fine performance off the bench in Brisbane with a start at inside centre in place of Matt Giteau, who is struggling with a sternum problem.

Former skipper Michael Hooper returns to the bench to make way for Pocock but there is a good chance both flankers will be on the pitch at the same time against the Pumas after being two of Australia‘s best performers in Brisbane.

The in-form Joe Tomane comes in on the wing instead of Rob Horne, who aggravated a calf problem against South Africa, while Ben McCalman will play his first test of the year in place of Scott Higginbotham at number eight.

Greg Holmes was another replacement who impressed in Brisbane while playing his first test since 2007 and he is rewarded with the start at tighthead prop in place of Sekope Kepu.

Kepu was named on the bench along with lock Dean Mumm, who looks set to play his first test for five years, and versatile back Kurtley Beale, who will win his 50th cap after recovering from a quadricep strain.

After the test against Argentina, Australia have only back-to-back matches against world champions New Zealand and a test against the United States in Chicago before the World Cup.