New Zealand eke out win over Scotland at Murrayfield 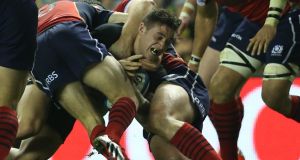 Victor Vito gave the All Blacks an early lead as he powered home with the opening try 12 minutes in before Tommy Seymour’s intercept score gave the delighted hosts an immediate response.

Outhalves Dan Carter and Grieg Laidlaw kept the score close with three penalties apiece but a successful effort from the boot of Colin Slade nudged New Zealand in front. Jeremy Thrush’s late score finally put daylight between the sides as New Zealand claimed their 28th win from 30 Tests against the Dark Blues. Laidlaw did have the chance to put

Scotland ahead with quarter of an hour remaining but tugged his penalty wide. Yet

Scotland can take huge credit from a performance that saw them come within 10 points of the Kiwis for the first time since 1991. The home side’s head coach Vern Cotter claimed in the build-up to the second autumn Test that the youthful side sent out by All Blacks boss Steven Hansen was packed with “stars of the future”. But it was the

Scotland defence which shined brightest as they soaked up phase after phase of New Zealand pressure for much of the second half. The performance of Cotter’s men in their five-try win over Argentina last week highlighted

Scotland’s growing attacking threat. But against a side as dangerous from anywhere on the pitch as the Kiwis, they knew they would have their defensive resolve tested to the limit. Their first serious examination came after just 12 minutes and the result was not good.

New Zealand scrumhalf TJ Perenara threw Vito a mongrel of a pass but the backrower did brilliantly to scoop it up and march into a strong stride.

Stuart Hogg and Laidlaw both tried to haul him down but there was no stopping the Hurricanes forward as he powered into the corner for the opening try.

Carter, though, pulled his conversion.

But like last week against Argentina, Scotland responded to an early setback both immediately and impressively.

Seymour — the scorer of an intercept try against the Pumas — repeated the trick as he pounced on Richie McCaw’s loose pass and ran in unopposed for the equalising score before Laidlaw stuck over the extras.

Yet New Zealand’s attacking surges refused to relent. The Scots were working hard to keep them at bay but more than a few times their graft over-stepped the mark, meaning Carter could add three penalties to the scoreboard against the lone shot at the posts managed by Laidlaw.

Even escaping their own 22 was a feat in itself for the Scots as the Kiwis put some huge hits on anyone brave enough to run the ball. With huge figures like iconic All Blacks skipper McCaw and flanker Sam Cane to penetrate, Scotland simply could not find a way through.

But after a pumped-up start to the second period, they were happy to accept another three points as centre Malakai Fekitoa was caught offside inside his own 22.

At the other end, the All Blacks looked to turn the screw but both at the set-piece and the break-down, Scotland stood up boldly to the challenge.

Carter’s departure as he was replaced by Liam Messam was a welcome sight for Scotland but gaining ground was proving to be an almost Herculean task.

With Carter off, Slade took over New Zealand’s kicking duties and finally added to the All Blacks’ tally 26 minutes into the second half. But Laidlaw again trimmed the world champions’ lead back with his third penalty.

When Wyatt Crockett blocked Laidlaw’s attempt to spread the play from an offside position, Scotland were handed the chance to nudge themselves in front with another penalty. But as the excitement grew, the sold-out Murrayfield was suddenly hushed as the skipper missed with his boot for the first time.

A streaker lightened the mood briefly but Scotland were not laughing as New Zealand pushed forward again. Again the Scots were having to defend desperately but the pressure finally told as Thrush found a gap in the home rearguard to squeeze over from close range, while Slade put the Kiwis out of sight with the conversion.