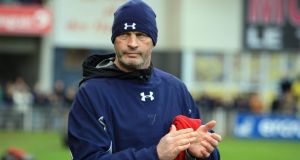 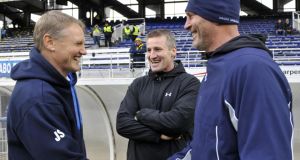 Josef Schmidt never seems to tire of talking rugby. He just doesn’t like talking about what he does in rugby. Like turning flankers into centres or four-hour round trips to Leinster outposts.

When recently invited by a school to do a session in the midst of their cup campaign, Schmidt agreed to attend on two conditions: every coach must agree to his on-field presence and it doesn’t become public knowledge.

No money exchanged hands. These are long term projects that might, perchance, unearth a rough diamond.

Kiwis love their own soil but the Old World has always exerted a magnetic force. Even a place like Mullingar, as Schmidt discovered in the early 1990s, where they still speak fondly of him for almost guiding them into the AIL.

On November 24th Schmidt will tick another essential box for any New Zealand-born coach with aspirations: he will coach against his beloved All Blacks.

A first class winger with Manawatu and a talented basketball player, Schmidt hails from Kawakawa (population 1,347). He became a schoolteacher, making his rugby bones with Napier Boys 1st XV, coaching the NZ High School side from 1999 to 2003.

Schmidt is following a well-worn path, walked before by the likes of former All Blacks coach Graham Henry.

In 1998, Henry landed in Wales. By 2002 they had enough of him in The Principality, after a 54-10 thrashing by Ireland, but not before the British and Irish Lions hierarchy deemed him the best man to oversee the tour of Australia in 2001.

By late 2003, Henry had the most demanding job in rugby just before Auckland were recruiting Schmidt as backs coach, ahead of some of their homegrown candidates after he carved a name for himself with Bay of Plenty.

Teaming up with Vern Cotter, they won the Ranfurly Shield in 2004 – better known as the Log of Wood.

Both men were instantly promoted, Cotter going to the Canterbury Crusaders.

The New Zealand Herald subsequently reported: “New backs coach Joe Schmidt never got Spencer at all. The two men had different views, different ideas and . . . the relationship was hanging by a thread. “Spencer was accused of not following the game plan and out he went – replaced by Tasesa Lavea.”

He wasn’t long recruiting Schmidt and in 2007, along with wife Kellie and their four children, they embarked on a new life in the Massif Central.

After three painful, yet valuable defeats in the Top 14 championship final, Clermont finally captured the Bouclier de Brennus in 2010.

Mr Rugby
Around the same time Michael Cheika’s reign at Leinster was ending. Isa Nacewa was asked who should be Leinster’s coach. The only name he could think of was his former backs coach at the Blues.

Schmidt, unburdened by the shackles of being a number two, has reached his potential in Dublin these past three years. The great dictators always have to serve their time, leeching the best leadership qualities from the shadows.

Word is Schmidt took one look around at his first pre-season training session and decided all they would be doing for the next few weeks was handling drills. Imagine the joy on the faces of Brian O’Driscoll, Luke Fitzgerald et al when hearing they would be transformed into the best passing team in Europe.

You see it now when Devin Toner scoops a ball off his heels and transfers it in one motion. Or when Gordon D’Arcy flings a cut out pass off his left paw. Or the evolution of Ian Madigan.

Europe fell before his feet twice, both times at the expense of Cotter’s Clermont.

A third European title looks imminent and that will stand the test of time, but it is more the consistency of Schmidt’s team that shines through.

It is the clarity of their play, the direct intent, the awareness of space.

A genial character, he has nonetheless been fearless in the face of perceived injustice. Speaking out against Eddie Wigglesworth’s foreign player ruling two winters back and Paul O’Connell’s wayward boot wouldn’t have made him popular in some very influential parishes.

“Inevitably at some time, we will end up going back,” said Schmidt recently before John Kirwan took the Blues job. “I don’t know if I will be coaching or what I will be doing. Home is Palmerston North and our family and friends are still around there and up in Napier.”

The Ireland job comes with a three-year road map, but it will eventually lead him home. And he’ll still be a coach.