Matt Williams: We will see Ireland’s worth against a pissed-off New Zealand team

Kiwis seek revenge, hoping to inspire those back home affected by the earthquake 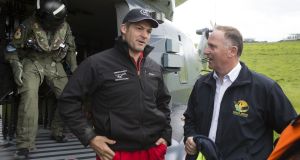 Two weeks ago in the Chicago hotel where New Zealand were staying, immediately after Ireland achieved perhaps their most celebrated one-off victory in rugby, there may have been a few icy cold Kiwi Steinlagers sitting on the coaches’ table.

The tops were lovingly removed from the cold beers and the bottles handed around to each New Zealand staff member. After the first sip had washed away the dust of Soldier Field, a wise old coach, perhaps Wayne Smith, might have ventured: “You know what? In the long run, getting beaten today might be a very good thing for us.”

Now the New Zealand coaches will never admit that any failure is a good thing. However, Ireland’s victory not only ended New Zealand’s undefeated run, it has taken away all the pressure and media hype from the team’s world record breaking winning streak.

The New Zealand leaders would look at the defeat as an opportunity to work on their resilience and exercise it like a muscle, to make it stronger. That is how powerfully they think.

While Steve Hansen and Smith are true warriors and defeat is alien to everything they hold dear, after some reflection they may be feeling a bit of Irish humble pie that was served nice and warm in Chicago was just what the doctor ordered.

I would venture the intensity at New Zealand training was ramped up several levels and during the contact sessions blood was spilt.

While taking nothing away from the Irish win, we must also take into account the recent Kiwi travel programme. It is scarcely credible.

All in the past six weeks. That schedule would fatigue any team.

I miss a lot of things about being in full-time professional rugby, but airports, long haul flights and hotel rooms are not on that list. The New Zealand travel schedule is perhaps the most arduous I can remember.

While racking up frequent flyer points sounds glamorous, I can assure it is not. It is a hard and exhausting grind. Not only is it fatiguing but the fatigue is accumulative. For some of the New Zealanders it would be their third trip to South Africa and their second to Argentina in eight months. On the end of Super Rugby season that started in January, then June internationals, frequent trips across “the ditch” to Australia and then the Rugby Championship, there are a lot of tired workers from the south.

That means New Zealand were vulnerable in Chicago and Ireland exploited that vulnerability. New Zealand were out-tackled, out-attacked, out-thought and most astonishingly out-enthused. Ireland’s energy and purpose were simply extraordinary.

In Dublin, that Kiwi vulnerability will not exist. From bitter experience I can guarantee that inside the chest of a New Zealander who has just lost a big game of rugby, beats a cold, pitiless heart, hell bent on inflicting pain, suffering and revenge.

The true worth of this Irish team will be measured in how they play at the Aviva against a bunch of extremely pissed off New Zealanders.

Ireland must produce another high energy, ultra-enthusiastic performance, but this time on Irish soil. To observe the mental resilience of the Irish will be fascinating.

Essentially, this week they must bring an even higher standard of attacking mindset to the Aviva than they did at Soldier Field if they are to win.

The New Zealanders will be playing with a special intensity.

The people in the Canterbury region of the South Island are enduring the devastation of yet another catastrophic earthquake. While my mates in Christchurch tell me that the city has been relatively spared, after the demolition of 2011, it is now the town of Kaikoura and the people north of Christchurch that are suffering.

Cantabrians are the toughest competitors I have ever dealt with on a rugby field. Off it, they are some of the most wonderfully generous people I have met. They are hurting, but as a community they remain tough, united and positive.

While all in the rugby world wish to send their best wishes and support to the New Zealanders affected, the men wearing the black jerseys know that a big performance from them will bring some joy to those whose hearts have been broken, but whose spirit remains indomitable.

While we are all interested in a potentially, great game of rugby, there is something much more important than rugby happening on the South Island. Many good and honest people are trying to pick up the pieces of shattered lives.

Yet, no matter how intolerably difficult a personal situations gets for a Kiwi, their life it is always that little much easier to deal with when their beloved rugby team wins.

No matter this week’s score, those people will never, ever be beaten.