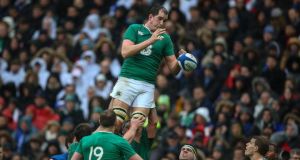 Tall tales: England coach Eddie Jones would never think about putting massive pressure on Ireland’s lineout, because if he did, it might ruin Ireland’s platform to go forward. Photograph: Billy Stickland/Inpho

Every word that follows is a sarcastic lie . . . Gee, I am enjoying all the Six Nations games this year. The ball movement, the creative thinking, the sheer caprice of the “let’s play the game in the true spirit it was created”; this good, old-fashioned attitude of every team has got me going all gooey.

You know, I cannot think of anything better on a rugby field than the sight of 15 sweaty Italians who, in their last match against England, basically missed tackles and dropped perfectly good passes for 80 minutes. Or the experience of watching the Welsh playing Wazza ball AGAIN! It’s so fresh and new. It’s just like I have never seen it before, rather than in the last 50 Welsh games.

Eddie Jones, he is such a fun guy at press conferences. Always kidding around and bringing out his infectious, extrovert personality. Like this week when he was saying Ireland kick the ball so much it’s like they play Aussie rules. What a joker! But then Guy Novès said Ireland played like the Springboks of the north. Well at least here is one truth, I know: both the Springboks and Aussie rules bore me to tears.

When we all know in reality Ireland play like an NFL team’s running game. One pass to one runner who gets smashed. Now that sounds like fun.

This attacking system that Joe Schmidt has thought up is so exciting. It must be one of the great pieces of creative coaching. It must have taken months of planning and practice to get the players to run, one at a time, in single file, like a series of Forrest Gump clones, headlong into the arms of two defenders.

After all if you get into space you may be tempted to offload a pass to a support player and he would have to run. That would ruin those wonderful stats that tell us Ireland made no line breaks against France and have the worst metres gained in the Six Nations. (Sorry, those last stats were not lies.)

Nobody wants to see Ireland score a swag of tries when they can see box kicks, cross-field kicks, kicks at goal and the ever popular garryowen all in the space of 15 minutes. Gee, Eddie Jones may not have been telling fibs.

I bet that is exactly what William Webb Ellis had in mind when he picked up the ball and ran with it all those years ago. He really wanted to run into people, not away from them. Didn’t he?

After all this week it’s only England, at good old Twickers. It’s such a nice place to visit, because the English just love to host us. They sing that great song of theirs, Swing Low, Sweet Chariot. I heard a terrible story that an Irish supporter once yelled at them to “shove their chariot up their bum”. But I don’t believe an Irish person could ever be so rude.

England have done no thinking and little training because they are going to take it easy on the green team. After all, the English are very well rested, as a reward for their memorable efforts in the Rugby World Cup.

England were such generous RWC hosts that they gave up their spot in the quarter-finals just to let the Australians have a good run.

I have heard their new coach, Eddie Jones, is a bit lazy and likes to sleep in. He has not worked 24 hours a day analysing Ireland down to the last atom. He has not got the English team’s defensive system so well prepared that he has already predicted the areas on the pitch Ireland are going to try and attack.

He would not be such a rotter, as to target the Irish lineout and scrum. Eddie would never think about attempting to put massive pressure on Ireland’s setpieces. Especially the lineout, because he knows if he did that it would ruin Ireland’s platform to go forward and Eddie is just too nice a guy to play such a dirty hand.

Eddie is such a thoughtful guy.

Joe Schmidt, on the other hand, must be very confident his team can run in the tries and rack up the points to keep pressure on the white team. After all, Ireland have been a try-scoring machine for well over a year.

When the game has run its course and the truth is exposed, in its fullest, as it almost always is on Test match day, the reality and the honesty that will be unveiled, will not be joyous to watch for the Irish.

A win is almost an impossibility. Historically, that is when Ireland are at their most potent. With that said, the rugby gods will have to tell some great big porky pies to conjure up a historic Irish victory.