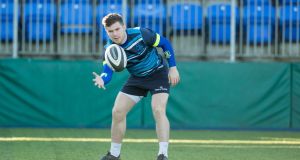 Luke McGrath appears to be out of contention for the Ireland squad that plays Wales next Saturday in Dublin.

Captaining Leinster in Saturday’s 20-13 victory over Pro 14 champions the Scarlets, McGrath was forced off on 48 minutes with a knee injury.

Initial prognosis has ruled out an Anterior Cruciate Ligament (ACL) tear which requires surgery and a nine-month layoff.

“Luke, with his knee, we’ll see,” said Leinster coach Leo Cullen. “I’m not sure. He has a bag of ice on it but he is moving around okay. He will get it scanned. He was due to go back into [Ireland] camp but we will make some assessments on what is best for his recovery.”

This puts Connacht’s Kieran Marmion in position to cover for Conor Murray.

On Rory O’Loughlin’s concussion, Cullen stated: “Rory was okay there. He is taken off with a suspicion of a HIA so he will go through the return to play [protocols].”