My views were honest and genuine, Irish flanker responds in clarifying statement 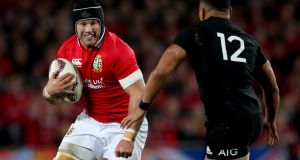 Seán O’Brien in action for the British and Irish Lions during the third Test against New Zealand at Eden Park in Auckland. Photograph: James Crombie/Inpho

Seán O’Brien’s critique of the coaching staff for the training load in the build-up to the first and third Tests in New Zealand has prompted a rebuke from the British & Irish Lions’ chief executive John Feehan.

Head coach Warren Gatland, as well as his assistants Rob Howley, Steve Borthwick and Andy Farrell, who is also the Irish defence coach, are also understood to be angered by the Leinster and Irish flanker’s remarks.

The Lions issued a statement yesterday in which Feehan said: “I said all along that I think we had the best coaching team available and I think they proved that in what we achieved in New Zealand. To draw a series with the All Blacks, who had not lost a Test match at home for eight years was a remarkable result and Warren and the coaches deserve huge credit for that.

“People will always have their views on what could have been done better but the fact is that, against all the odds and with limited preparation time, this squad became only the second Lions team in history to either win or draw a series in New Zealand in 13 attempts. That achievement cannot be underestimated.”

In response, the Lions management have made it known that the training on that Thursday consisted of an optional gym session, a 35-minute unit session (lineout and scrums) in the morning and then a 45-minute rugby session (including an eight-minute warm-up) in the afternoon.

Gatland acknowledged there had been a slight overload in the build-up to the first Test. Following the Lions’ win in the second Test, he said: “We freshened them up a bit and made the week a little lighter. When we looked back on the tape of the first Test, our forwards were a bit heavy-legged. We did a double session on the Thursday in the first Test week. I don’t think it was just the double session, it was the accumulation of three to four weeks of no days off, travel, the games, the trainings, walk-through, everything the coaches do, the meetings. So we consciously lightened up last week.”

O’Brien maintained that the squad should also have trained on the Tuesday in Queenstown before the third Test, and taken the Wednesday off, as opposed to the other way around. But Gatland and co took the view that the squad needed three days in succession without rugby to have the requisite R&R before resuming preparations for the third Test at the end of a demanding and travel-loaded tour which was short on days off.

The Lions coaching staff are particularly aggrieved with O’Brien for levelling blame at Howley over the Lions’ attacking game.

In response, they have made it known that the Lions made the most clean breaks (15 in the first Test) by any visiting international team in New Zealand since 2012, while Wales made 14 and 13 in two of their three Tests on their summer tour of 2016. Furthermore, of the 155 clean breaks made against the All Blacks in their 30 home games since 2012, 47 of those were made by Wales and the Lions.

It read: “To be clear, my views on the Lions tour were honest and genuine and solely with the intention of building on what was a great tour.

“Unfortunately some people have focused on what I feel we could have done better instead of what we did well.

“I have nothing but respect for Warren and the whole coaching team, in addition to the rest of the back room staff and squad of players.

“But do I believe we – the players and coaches – could have done better? Yes.

“Do I believe the Lions squad in 2021 will be better for this? Yes.

“If we don’t look to build on and improve on the tour to New Zealand how can future Lions squads get better?

“It is a privilege and an honour to be called a British & Irish Lion and I hope that this clarifies my position once and for all.”