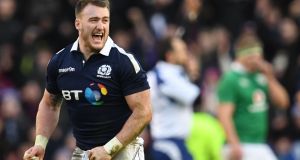 William Shakespeare’s words “What’s past is prologue” are engraved in Washington DC as a gentle reminder that history is but the introduction. Ireland have built huge success these past seasons on three pillars; the one-out runner, the lineout maul and the box-kick. History has been very kind to these three ingredients but then Vern Cotter was paying attention to them also and I assume, as all leaders do in preparation for battle, he asked the crucial question: “what is their centre of gravity?” And, as Clausewitz wrote, a decisive act on same will cause the opponent to yield.

That Irish source of strength are those pillars, manifest in our strong boys: Seán O’Brien, CJ Stander and Robbie Henshaw. In attacking our centre of gravity, Scotland smashed these three guys like never before; oft times in double and triple teams. This stopped Ireland’s flow, messed up the recycle and crucially afforded Scotland defensive reset time for another onslaught of tackles.

1 One hundred Irish retailers for all your online Christmas shopping
2 Life under Level 5: Where can I go, who can I see, what is closed and what is open?
3 Thousands of gardaí mount checkpoints and patrol parks, beauty spots
4 Lockdown meals: 50 great Irish restaurant food boxes to go
5 Covid-19: Pressure over breakdown in tracing system intensifies as State enters Level 5
6 Black Friday has become Black November for Irish retailers
7 Developer’s impeccably restored Fitzwilliam Square Georgian for €3.5m
8 Should women erase men from their lives? This writer thinks so
9 Nearly 400 Brazilians have tested positive for Covid-19 in Ireland, data shows
10 John Gilligan arrested along with two others in southern Spain
11 Miriam Lord: All test and no trace makes Jack a very ill boy
12 Suzanne Lynch’s US Election Diary: Trump ready to go on the attack over Biden's son in final debate
13 Newton Emerson: The Border is not the reason there cannot be a zero-Covid policy
14 Andy Farrell reshuffles his hand for rescheduled Italy game
15 Shock at golf clubs as sport faces shutdown in Level 5
16 Supermarkets gear up for winter lockdown
17 How long can Government afford to keep State pension age at 66?
18 Call for financial support for west Kerry if Fungie does not return
19 Philip Reid: Hard to find the sense in closing golf clubs
20 US election: Trump voters are energised in North Carolina but the state is on a knife-edge
21 Borat 2: Rudy Giuliani’s trouser-reaching scene is the work of a daring young woman
22 Coronavirus: Germany and Spain report record daily cases
23 Traffic light system for Covid detection to operate at Irish airports in November
24 My Irish passport has calmed tempers at borders and airports
25 Why work more than 15 hours a week?
26 China’s scaled-up climate targets send ‘a pointed message to US’
27 Covid-19 restrictions in Europe: how does Ireland compare?
28 Gadgets to help keep your home safer this winter
29 Tennis clubs to remain open in Level 5 until ‘further clarification’ is provided
30 Much of what we think about Covid-19 is wrong. We need to change the conversation
31 Covid-19 Level 5 support bubbles: Everything you need to know
32 Gym owner plans to defy restrictions and open
33 No doctor, no pharmacy, no supermarket: I’m moving to an island
34 Ikea seeks to build a new version of itself
35 Des Bishop apologises to Traveller community for comments in interview
36 Micheál Martin to seek suggestions for projects under €500m ‘shared island’ fund
37 Six Nations - Ireland v Italy: Kick-off time, TV details, team news, standings and more
38 Covid-19 laws: What can gardaí enforce and what penalties can be given?
39 Irish start-up Wayflyer raises €7.8m in seed funding
40 Golf clubs must close under Level 5 Covid-19 restrictions
Real news has value SUBSCRIBE