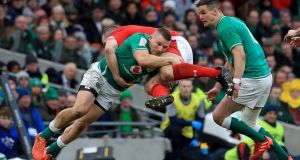 “The Box Kick”, Leaving Cert English, Paper one. No doubt PhD theses are being written on this subject. Conor Murray kicked last Saturday, but few were box kicks in the classic sense as he chose distance, increasing the metres gained over Scotland by 12 per cent.

I noted on Friday that Ireland were vulnerable and – despite a brilliant win over Wales, scoring four tries – they remain vulnerable. As with any form of transition, the old DNA will at times get mixed with the new. In these moments, even at the elite level of these players, mistakes can occur. To limit this, Ireland managed possession like their lives depended on it. Vast swathes of time went by with the home team owning the ball for 71 per cent of the time in the opening 30 minutes.

8 The only four skincare products you need

9 Taxing pandemic payment ‘could be unconstitutional’

11 WHO warns of ‘catastrophic moral failure’ in Covid vaccine distribution

18 Man who sexually assaulted woman on Luas tram is jailed

21 Speedy rollout of vaccine puts Israel ahead of the rest

26 Sitting up straight does not prevent or treat back pain, study finds

29 Germany to extend lockdown into February amid new restrictions

36 Gary O’Hanlon: ‘Guys are supposed to be fine about miscarriages. But I wasn’t’

38 Joe Biden’s presidential inauguration: Where can I watch, and what are the key moments?

39 Child abuser is jailed 18 years after he admitted assaults