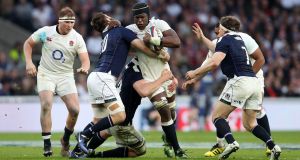 England’s Maro Itoje in action against Scotland: he is “like some sort of hybrid player that comes along but once a century”. Photograph: David Davies/PA Wire

England’s Jonathan Joseph was named man of the match for the game against Scotland in Twickenham on Saturday, but he’s not my main worry. It is is Maro Itoje who was wearing number six. In Itoje England have a man in the blindside jersey who comes with a massive difference.

Yes, he “argues” like a six and, yes, he runs and carries as a six. He also defends like a six and his incredible breakdown work is also like a six. However, his lineout work is like a 5½ and most impressively he does all this whilst scrummaging behind his tighthead prop as a number five.

1 Dr Martin Feeley: Young and healthy majority need to be allowed to live
2 Aer Lingus staff say they are living in ‘near poverty’ and unable to cover rent
3 Family deals with its loss as serial killer still roams free
4 Covid-19: Warning of similar measures for other counties as Donegal moves to Level 3
5 Two turnkey homes for sale on same street as owners leave Dublin
6 Madrid vs New York: A tale of two cities during Covid-19
7 Man found guilty of murder of Ciara Glennon and second woman in 1990s
8 Séamus Woulfe: The last man standing in Golfgate is set to learn his fate
9 Millennial burnout: ‘The first generation predicted to go backwards in terms of life expectancy’
10 Just four countries remain on green list: Where do we stand with travel now?
11 Next 10 days critical in fight against Covid-19 in Cork, says adviser
12 Covid-19 Q&A: How are we doing now and is there any good news?
13 Covid-19: Three more deaths and 324 new cases in State as ‘green list’ of countries reduced
14 Diarmaid Ferriter: My advice to Government – stop hiring advisers
15 Rob Kearney set for Perth move to join Western Force
16 Republican leaders reject Trump’s stance on peaceful transition of power
17 Germany’s ‘Uncle Brexit’ can’t explain Westminster anymore
18 Volvo’s XC40 plug-in hybrid beats the BMW X1 – how did that happen?
19 Nursing home ordered to pay €150,000 to care workers sexually harassed by 93 year old
20 A piece of heaven on 300-acre Tipperary estate for €8.5m
21 Five lessons I learned preparing my house for sale
22 Dundalk win Sheriff shoot-out to move within sight of €3m Europa League bounty
23 FinCEN Files: Dublin-listed fund sent $23m to firm suspected of links to Russian crime boss
24 Irish company to test vaccines on volunteers deliberately infected with Covid-19
25 Donegal to move to Level 3 Covid-19 restrictions, Taoiseach confirms
26 People leaving Catholic church because they are tired of ‘little old men’ - McAleese
27 Why are men still explaining things to women?
28 What does €650k buy in Italy, Portugal, England, Turkey and Dublin 5?
29 Ireland faces devastating blow due to our failure to develop ferry services to Europe
30 Shelbourne Hotel statues to be restored to their plinths
31 Dining out: 12 of Dublin’s best restaurants with outdoor spaces
32 Cancel culture: can you defend people who say unpopular things?
33 Dunnes Stores set to enter grocery delivery market
34 Trump refuses to commit to peaceful transfer of power if he loses election
35 A history of Ireland for outsiders: From Henry VIII to the Troubles
36 Irish Open: Galgorm Castle proves tough nut to crack in opening skirmishes
37 Mary’s story: The Magdalene laundry survivor who still lives there
38 Air travel never going ‘back to way it was’
39 Katherine Ryan: ‘I definitely felt shame as a single mother, the way people word things’
40 Coronavirus vaccine: 15 billion doses needed to inoculate the planet
Real news has value SUBSCRIBE