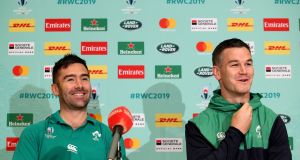 Back in 2002, when they were the 16-year-old half-backs with a touring team from St Mary’s College, Johnny Sexton and Vinny Hammond, one of the Irish team’s video analysts, played in an invitational tournament in Fukuoka. Time moves on, yet life comes full circle.

Sitting alongside each other in Ireland’s farewell media conference to Fukuoka two days after the 47-5 win over Samoa which secured Ireland’s safe passage to another World Cup quarter-final, the former half-back partners revisited that trip.

“We played Wesley College, ” recalled Hammond, of their opening opponents, the celebrated rugby nursery which was the alma mater of Jonah Lomu, Sitiveni Sivivatu, Casey Laulala and many others.

“We arrived in here at midnight and I think the next morning at like half-seven we kicked off or something. We kicked off against Wesley College from New Zealand. So, we were facing the haka at half seven in the morning! We got absolutely pumped. It was a disaster,” laughed Hammond.

There were plenty of other memories too.

“We were 16 so there’s not too many we can talk about,” said Sexton. “What was it, we were all in one room? There was 35 of us in one room. There were triple bunk beds so you can imagine getting in at midnight was one problem and then I suppose not getting any sleep was the other problem. The fact that there was 35 in one room with no air con. I don’t think there was air con?” he said, turning to Hammond.

“They just put big massive blocks of ice in the rooms to cool it down,” confirmed Hammond.

It was the first time Sexton played against a team from New Zealand. “Yeah, definitely, and they were probably the best team in New Zealand. I think they’re famous for producing All Blacks. I actually never looked at their team to see who came out of it.”

“I think [Sekope] Kepu was the only one who might have played against us,” said Hammond of the Wallabies prop, who was a number eight back then.

What was the final score?

That edge and good-natured ribbing between half-back partners remains, 17 years or so on.

“I feel sorry for Conor [Murray],” said Hammond in light of the landmark which the current Irish half-backs will reach next Saturday against the All Blacks. “Conor’s actually the guy who you should be crediting for lasting that long.”

Hammond’s other boss in recent years, and again on this trip, is Joe Schmidt. Asked what it was like working for him, he said, tongue-in-cheek: “When we arrived here he said, ‘There is a beach trip on Tuesday and Thursday if you want to go . . .’ No, no, it’s the same as ever.”

“I guess one of the positives is that because you know the structure of the tournament and you do know what is coming if you were to go quarter-final, semi-final, final, so you do have a lot of the work done and we’ve got maybe five analysts back in Dublin working.

“The way the different time zones work, it’s handy, when we are asleep, that they are working, so we are getting stuff when we wake up in the morning. But Joe has been great, no problems.”

With such back-up at home – no less than the other video analyst Mervyn Murphy –Hammond has been enjoying more sleep than normal on tour, and certainly more than was the case when working with the Lions in New Zealand two seasons ago, when five or six hours was a lie-in.

Hammond, a cousin of the Dundalk manager Vinny Perth, has probably studied the All Blacks more than any other team, and he paused long and hard when asked what has set them apart.

“I think it’s being clinical. If they get a chance they take it and I think that’s what every team aspires to be. I think Japan had a couple of chances early yesterday and they scored off them. It changes the whole tone of the game.

“I think that’s what we have to have, really. When we get a shot, we fire it.”