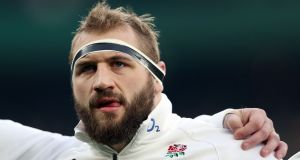 Joe Marler called Wales prop Samson Lee a “gypsy boy”, but has insisted he is not a racist. Photograph: David Davies/PA

A three-man independent judicial committee suspended Marler following a hearing in London, World Rugby announced. He was also fined £20,000 — to be paid to a suitable equality charity — after a misconduct charge against him was upheld.

The 25-year-old, who has won 42 caps, had avoided any sanction from Six Nations chiefs and the Rugby Football Union following the March 12th incident, but World Rugby launched independent action.

World Rugby said the misconduct charge was “admitted in its entirety” by Marler.

Marler apologised to Wales prop Lee at half-time in the match on March 12th, and he took to Twitter on Monday night, apologising to “anyone who was offended” and that he would accept the World Rugby ruling.

He is now banned until April 18th, and will miss Quins’ European Challenge Cup quarter-final against London Irish on Saturday, plus an Aviva Premiership appointment with league leaders Saracens at Wembley seven days later.

Marler initially avoided a suspension after Six Nations chiefs judged his remorse, apology at half-time and subsequent admonishing by England as sufficient punishment.

But World Rugby’s decision to launch independent action outlined a level of dissatisfaction with that move, leaving the Six Nations disciplinary process under almost as much scrutiny during the past 24 days as Marler himself.

In a statement issued following what was thought to be a six-hour hearing on Tuesday, World Rugby said: “Joe Marler has been suspended for two matches and fined £20,000 to be paid to a suitable equality charity in the UK after an independent judicial committee upheld a misconduct charge against the player at a hearing in London today.

“A misconduct charge was brought by World Rugby against Marler in relation to a breach of Regulation 20 and the code of conduct, for comments made towards Samson Lee during the England versus Wales RBS 6 Nations match at Twickenham on 12th March.

“Regulation 20 and the code of conduct both cover statements that are unsporting and/or insulting and/or discriminatory by reason of race or ethnic origin, which bring or have the potential to bring the game into disrepute.

“The charge was admitted in its entirety by Marler and upheld by the independent judicial panel comprising Terry Willis (chair, Australia), Jean-Noel Couraud (France) and Alan Hudson (Canada).”

The statement continued: “Following a full review of all the evidence, including a detailed analysis of the broadcast feed, referee microphone, statements and submissions on behalf of Marler by his representative Mark Milliken-Smith QC, and World Rugby, the committee found:

“That Marler had used unsporting and discriminatory language towards Lee.

“That by his actions, Marler had breached World Rugby Regulation 20 and the code of conduct and brought the game into disrepute.

“That Marler was proactive in apologising to Lee at half-time during the match, and that he subsequently issued a public and unreserved apology for his comments.

“That Marler is a person of good character and had no similar misconduct charges.”

The committee determined that Marler’s breach was serious, and imposed their sanction. Marler has a right of appeal within seven days of notification of the full written decision.