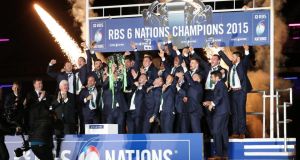 Were the Government to go ahead with its proposal to “list” Ireland’s Six Nations games for free-to-air terrestrial television, IRFU officials fear the organisation could be ostracised by the other home unions in the next round of negotiations for a new television deal in 2017.

The Six Nations championship is the IRFU’s prime source of finance. This season its share would have yielded up towards €20 million, the vast bulk from television rights.

However, were the Six Nations games listed – which is not the case for England, Wales and Scotland – the IRFU’s hands would be tied, and its counterparts could thus exclude the IRFU from any future deal or reduce significantly its share of the cake.

The consequences of this would make it well nigh impossible for the IRFU to maintain four professional set-ups in the provinces and keep the front- line players at home.

Ireland’s home games are currently listed as category B events, which stipulates that the games must have deferred coverage on terrestrial TV.

In the fall-out of the tumultuous March 21st finale to the Six Nations, which was available on both RTÉ and BBC and ensured record viewing figures, the Minister for Communications Alex White said he is considering adding Ireland’s home matches in the Six Nations to a list of free-to-air events that includes the All-Ireland finals.

The difference, of course, is that whereas the All-Ireland finals are exclusively national events, the Six Nations are not – the clue being in the title.

“I think there is a case if you look at the Six Nations,” said White. “The question I have to ask is, does it have a distinct cultural significance or importance for Irish people? I think there is a strong case for it.”

Asked about the opposition of the IRFU to the move, White told RTÉ’s The Week in Politics programme that “I will respect what they have to say”.

A similar proposal was considered by Eamon Ryan in the last government. The IRFU’s stance on this issue has, if anything, hardened in light of the Anglo-French axis that forced a revamped European Champions Cup to replace the Heineken Cup, with a greater share of the television revenues for English and French clubs.

“The Designation of Major Events Order 2003 – requiring deferred free-to-air coverage of Ireland’s Six Nations Championship matches, but not listing the Irish provinces’ European matches – strikes an appropriate balance between our desire to make the matches accessible to the widest possible audience and the need to avoid causing Irish rugby substantial financial losses.”

The Six Nations generates nearly €100 million per annum in television rights, a figure that would not be possible if they were listed events in each of the six competing countries.

That is admittedly the case in France, albeit there are nine terrestrial television stations, of which realistically only France Television and TF1 are in competition for Six Nations games. The tournament would yield considerably more were the games not listed in France.

By contrast, unencumbered by such ringfencing, the clubs’ umbrella organisation, LNR, recently completed a five-year deal for the rights to the Top 14, which amounted to more than €70 million per annum over five years.

Similarly, Premiership Rugby signed a deal in 2012 with BT Sport to show domestic and Europe games worth £208 million (€284 million).

Of the near €100 million per annum that the Six Nations generates in media rights, of which TV rights provides the vast bulk, about 75 per cent is shared evenly between the six competing countries, with almost 13 per cent shared out based on the countries’ respective number of clubs. The rest is reserved for the prize fund.

It is quite an egalitarian system, which could be completely unhinged were Ireland’s games listed.

As it is, Ireland brings in far less than it takes out from rights to the Six Nations.

In the last round of negotiations, almost uniquely in world sport, RTÉ secured rights to Ireland’s game for a reduced figure, believed to be about €2.5 million per annum, whereas previously it had paid €3 million.

The national broadcaster could afford to reduce the bid due to the lack of commercial competition. Were the Government to list Ireland’s Six Nations games at home, RTÉ would be even more confident that it could secure those matches.

It could extract a higher premium from pay-per-view TV, but having a competitive market place contributes to the BBC paying a market price.

The BBC’s most recent deal for the exclusive UK broadcast and online coverage of the Six Nations is reported to have been worth almost €220 million over four years.

Therein are another two examples of why the Six Nations Rugby and the IRFU need to retain some elbow room in future negotiations.

Indeed, the chief executive of Six Nations Rugby, John Feehan, said last month that he wished to explore the option of selling the rights next year to satellite television companies to increase the revenues from the tournament.

“The championship has never been healthier, it is in great shape, and our terrestrial broadcasters have been fantastic partners,” he said.

“But that being said, they, like anybody else, have to be kept honest.”

nSky Sports yesterday announced they will show exclusive live coverage of both Ireland’s home games and Ireland’s final warm-up game against England in Twickenham as Ireland complete preparations for the 2015 Rugby World Cup.