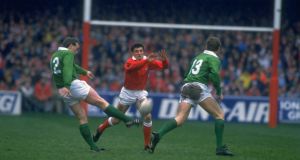 Meetings between Ireland and Wales are akin to a two-horse race, but at times over the last two or three decades it’s been easier to pick the winner of the Grand National. Form over course and distance, favouritism and home advantage – you name it, it goes out the window.

In the last 38 meetings, stretching back to 1984, there have only been 11 home wins. Granted, this includes three matches in World Cups, and thus on neutral territory. But of the other 35 clashes, 11 home wins have been set against one draw and 23 away wins. Go figure. One ventures that the favourites haven’t fared a whole lot better. There’s been no other fixture like it.

Of course, it wasn’t always like this. When Ireland travelled to the Cardiff Arms Park in Mick Doyle’s first season in 1985, the Welsh capital had become almost as daunting a venue as Paris. Ireland had lost on their preceding eight treks to Cardiff, dating back to a 3-0 win in 1967.

Three years beforehand, Mick Kiernan had made his debut against Wales at Lansdowne Road as a replacement for Dave Irwin, who broke his leg, in a 20-12 win. It was only Ireland’s second win over Wales since 1970. Two weeks later, Ireland beat England at Twickenham and a fortnight on accounted for Scotland to win a first Triple Crown since 1949. Kiernan thought this international lark was a doddle.

“It was the first time Ireland had won the Triple Crown in 30-odd years [33 to be precise] and we’d done it in six weeks,”says Kiernan, who was 21 at the time. “It was easy. That’s what you call a bit of luck.”

Kiernan was on the Irish side well beaten in Cardiff in 1983 (when winning their other three matches to share the title), and was dropped for the loss in Dublin a year later, before being recalled in 1985 and entrusted with the goal-kicking.

“Mick was a very positive character and it rubbed off on the team with a bit of a ‘give-it-a-go’ attitude. ‘Let’s let it rip whenever you get a chance.’ And you kind of get away with that for a season. It wouldn’t be a long-term thing, but it worked for us that year. We had a good few young fellas in the backline as well, which helped.”

As well as recalling Kiernan and Paul Dean at outhalf, Doyle gave debuts to Michael Bradley and Brendan Mullin in a narrow November defeat to a vintage Wallabies team.

Ireland went to Murrayfield and won 18-15 before Kiernan kicked five penalties in a bad-tempered 15-all draw at home to France before Ireland headed to Cardiff.

“We hadn’t won in Cardiff in almost 20 years, so that was a huge deal at the time,” recalls Kiernan. “We were complete underdogs. I just remember that it was a great game with some great tries; Trevor Ringland and Keith Crossan each scored a super try. Trevor’s was from a perfect kick to the corner by Michael Bradley. For Keith’s it was quick ball from the front five, and it just went along the backline. Hugo [MacNeill] hit a great line and gave it to Keith.”

Ireland won well, 21-9, with Kiernan kicked five from five. “It was a massive, massive win, beating Wales in Cardiff for the first time since 1967. That’s why it was so sweet, and it started the sequence of away wins.” Indeed, there would be six away wins in a row in the Five Nations, all of which Kiernan played in.

A year later Ireland lost 19-12 at Lansdowne Road, but in 1987 Ireland backed up an opening-day win and narrow losses to Scotland and France by winning 15-11 in Cardiff. “What tempered that was losing to them in the World Cup,” adds Kiernan, in reference to their 13-6 defeat in Wellington in their opening match of the inaugural World Cup that May.

Indeed, for many of the Irish team, it was virtually their next game of rugby as the IRFU decided the international players should be rested from club games. “I think we mightn’t have played a game for at least six or seven weeks. Madness, when you think of it.”

In 1988 there was another eminently forgettable 12-9 defeat to the Welsh but a year later in Cardiff, naturally, Ireland won again, by 19-13, in an otherwise winless Five Nations. And finally, in 1990, the sequence of six successive away wins in the fixture was broken with Ireland’s 14-8 victory in Lansdowne Road, which averted a whitewash. Kiernan only converted one of the three tries by Brian Smith, Terry Kingston and Denis McBride. “It must have been very windy,” he says.

There was a draw the following year in Cardiff, whereupon there was only one home win in the 10 championship meetings from 1992 to 2002. Akin to Kiernan, Eric Elwood made his debut against Wales in Cardiff in 1993 as Ireland won 19-14.

“Ireland had lost 11 games on the bounce before that match,” he recalls. “That was a turning point, and two weeks later we beat England at home (17-3). That was a great two weeks.”

Sure enough though, in 1994 Elwood was on the losing side by 17-15. “I missed a kick slightly to the left of the posts to win that game. I remember ‘Jenks’ [Neil Jenkins] was slagging me ’cos he had a disaster in ’93. He was asked had he “any sympathy for Eric?’ And he said: ‘Probably as much as he had for me last year’.”

Back in Cardiff, Ireland won again in ’95, and Elwood was part of the Irish team that beat Wales in Johannesburg in the 1995 World Cup. David Humphreys was at outhalf for a rare home win in ’96 before Elwood was restored for a 26-25 win in Cardiff in ’97 only to lose, naturally, in Lansdowne Road a year later by 30-21 in Warren Gatland’s first campaign.

Elwood’s Test career thus comprises three wins out of three in Cardiff, and two defeats out of two in Lansdowne Road.

“They obviously enjoy playing us over here and we love playing there. I can’t explain it. I just don’t have the shagging answer. For me, it was the aura of the Cardiff Arms. It was just a great gladiatorial coliseum, a brilliant place to play rugby, and you just got immersed in it.”

Simon Easterby came into the team in 2000, and after home defeats either side of an away win in his first two years, from 2004 there was an unusual run of five home wins in the next eight years. Even so, it’s ebbed again ever since then, with seven away wins in the last 11 encounters.

As a Welsh-based, Irish Test player who’s also coached the Scarlets and Ireland, even Easterby is perplexed. “I don’t know, is it too accessible for all the fans?” Easterby says, wondering aloud with a chuckle. “You end up getting too many Welshmen here and too many Irish in Cardiff? There’s probably more of a familiarity between Irish and Welsh players. The players know each other really well through Lions tours and the Pro12.

“Maybe the sides playing at home have felt more pressure because they are at home.”

“It’s a very funny fixture,” says Kiernan, “that’s why nobody can even call Sunday’s game. Two years ago I remember people talking Wales up as favourites and Ireland wiped the floor with them.”

But why is it so difficult to call?

Maybe it’s something to do with both countries expecting to beat the other, and maybe at times the favourites become a tad over-confident, as opposed to the lack of fear which comes with meeting France or England.

So, as for tomorrow?

“If Johnny is on his game, I think we will win,” forecasts Kiernan. “He is so pivotal and there’s nothing to touch him when he’s on his game.”

“They’ve picked two out and out sevens in Tipuric and Warburton,” says Elwood. “That’s going to be a huge challenge for our loose forwards. Joe will have something up his sleeve, but they’ve a very settled, strong, big physical team, and that worries me. I’m optimistic, but we couldn’t have come up against a bigger challenge in our first game, albeit at home.”

But therein lies the rub. Ireland are at home!