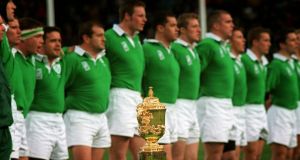 The Ireland team lines out ahead of their Rugby World Cup win over Romania at Lansdowne Road. Photograph: Dara Mac Dónaill / THE IRISH TIMES

Ireland’s bid to stage the 2023 Rugby World Cup is set to be officially unveiled on Friday.

Officials from the Irish Rugby Football Union (IRFU) will tomorrow join representatives from the government and the Northern Ireland Executive to outline their ambition to host the sport’s showpiece event.

Both administrations have been engaged in a preliminary assessment exercise over the last 10 months to weigh up the feasibility of submitting an official bid.

In February, former Irish international star Hugo MacNeill was asked to chair the cross-border working group examining the issue. It is understood an all-Ireland bid will be given the go ahead at an event in Armagh tomorrow morning.

As well as the traditional rugby stadiums such as the Aviva in Dublin, the Kingspan at Ravenhill in Belfast and Thomond Park in Limerick, a 2023 World Cup in Ireland would also hope to utilise a number of Gaelic football venues, including the Croke Park and its capacity of 82,300.

Ireland played their home matches in Croke Park between 2007 and 2010 while the Aviva stadium was being built on the site of the old Lansdowne Road.

Next year’s Rugby World Cup will be hosted by England with Japan hosting the event in 2019.

Ireland has hosted World Cup games in the past, most memorably in 1991, when Australia beat their hosts 19-18 in the quarter-finals after Michael Lynagh’s late try.

In the 1999 tournament, ostensibly hosted by Wales, the Pool E games were split between Ravenhill, Thomond Park and Lansdowne Road, while the quarter-final between France and Argentina was staged at the latter.

In May, current Ireland coach Joe Schmidt said an all-Ireland Rugby World Cup could replicate the success of his native New Zealand in its staging of the 2011 tournament.