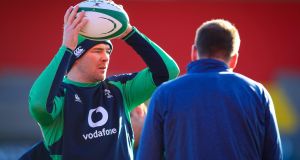 Ireland’s midfield options are, as has usually been the case in recent times, looking slimmer again for the remainder of the Six Nations campaign.

The odds on Garry Ringrose recovering from the fractured thumb he sustained against Scotland in the anticipated four-week time frame and then undertaking contact training in time for the Italian game are receding while Will Addison is still dealing with a troublesome calf problem.

Ireland head coach Andy Farrell confirmed as much on Thursday after the completion of the squad’s two-day camp in Cork. Addison, who’d been named among the 23 players, was unable to attend.

“He stayed at home because he is managing a calf,” said Farrell. “He is not going as well as he thought it would have done at the beginning of the week. He wasn’t able to train with us Wednesday, Thursday so hopefully he can get himself right.

“We didn’t want to travel him down and travel all the way back up from here to Belfast, which is a long old journey. So Will is still in rehab mode and hopefully he will be fit for next week’s training but we will see.”

Against that, both Johnny Sexton and Robbie Henshaw were able to take a full part in training, and the likelihood was that the latter would have retained his place at ‘13’, and equally that Keith Earls would remain among the replacements after his effective contribution for the last 35 minutes at outside centre against Wales.

As well as using his footwork for some strong, evasive carrying, Henshaw seemed to be looking for offloads more, although Farrell maintained this was not a product of a new emphasis, either individual or collective.

Caelan Doris, who was not considered for the Welsh game following the concussion he sustained in the early stages of his debut against Scotland, also resumed training this week. He is likely to return to the matchday squad but the effectiveness of the English backrow at the breakdown in their win over Scotland and the revitalised performances of Peter O’Mahony and CJ Stander makes it likely that the starting Irish backrow will remain unchanged.

“Well it’s great,” admitted Farrell of the competition in the backrow. “Pete’s performance has been a reaction in an unbelievably positive way to being on the bench and everyone had wrote CJ off, didn’t they, and we’ve seen what he’s done. That’s competition, that’s what they do, they’re professional athletes and they rise to these types of challenges and we expect them to be in the same place next week.”

Rare is the day Stander makes less than 10 carries, full stop, never mind picks up another man-of-the-match award in the process. This was largely in recognition of his ability in the jackal over the ball, although Farrell said they were not trying to re-invent him.

“The key is that the lads have it in the legs to be able to play the way they need to play, accurate, explosive and that’s with proper intent. There is a bit of management control as far as this is concerned but without trying to take away the point of difference, lads like James Ryan and CJ like to get through a ton of work. So you don’t want to hold them up, just give a bit of education along the way.”

Nor are the Irish coaches swayed excessively by player statistics.

“Numbers aren’t everything to us. It is what we see and watch and what presents itself to us in those moments that matter in the game, so we go off that.”