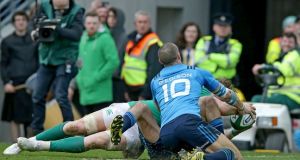 Jamie Heaslip’s first try against Italy in the 2016 Six Nations has been named Try of the Year at the World Rugby awards. Photograph: Inpho/Morgan Treacy

Nominee Jamie Heaslip has missed out on being named World Rugby Player of the Year, with New Zealand’s Beauden Barrett handed the award at a ceremony in London on Sunday night.

However there was a consolation prize for the Ireland and Leinster number eight as he was handed the IRPA Try of the Year award for his effort against Italy during the Six Nations.

Heaslip finished off a flowing move which started deep inside the Irish 22 during the 58-15 win over the Azzurri in Dublin, and 57% of the 16,000 public votes cast ranked his score ahead of tries by Japan’s Kaito Shigeno and New Zealand’s TJ Perenara.

He picked up the gong on the back of a year which saw the All Blacks stretch their unbeaten run in Test matches to 18 - until their defeat to Ireland in Chicago.

Barrett was particularly impressive during the Rugby Championship, and on receiving the award he said: “It means so much and it is certainly not something I expected to be awarded, or even to have my name thrown in the mix with the talented players we saw nominated.

“It’s a by-product of a couple of great teams I have been a part of this year, the Hurricanes and the All Blacks. I have to thank the coaches and my team-mates around me because without them I wouldn’t be here.”

Elsewhere England captain Sarah Hunter picked up the Women’s Player of the Year award on the same day she led the world champions to a narrow 12-10 victory over Ireland at Belfield.

The All Blacks were predictably handed the Team of the Year award, with Steve Hansen picking up the coaches’ award.

Meanwhile Brian O’Driscoll will become the 121st inductee into the World Rugby Hall of Fame, with Shane Williams and Jonny Wilkinson also among 12 inductees who will be formally revealed on Thursday.