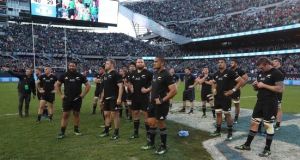 Having gone 28 games against Ireland without a defeat, it’s safe to say New Zealand were confident of stretching that run to 29 in Chicago on Saturday night.

And as reported by the New Zealand Herald, one Kiwi punter was so sure of an All Blacks victory they had placed $100,000 NZD on Steve Hansen’s side to remain unbeaten for the rest of 2016.

A TAB spokesperson confirmed to the New Zealand Herald the bet was placed before the All Blacks’ final Bledisloe Cup match against Australia, which they won.

However history was made on Saturday and Ireland conquered New Zealand for the first time in 111 years, winning 40-29 and leaving he or she with a beaten docket and a far lighter wallet.

It was possible to get odds of 10/1 about Ireland before their hurricane performance in the Windy City - a price which looks very generous after the event.

1 Tour de France: Every yellow jersey winner must feel guilty by some association
2 Kevin Babington: Learning to live again after life changed forever on Long Island
3 Marty McGrath and Ederney hoping to bridge a long gap in Fermanagh
4 Matt Williams: The sky is not falling in on Irish rugby - but Ireland do need a new plan
5 Born to ride, born to win: Sam Bennett, the making of a green machine
Real news has value SUBSCRIBE