Ireland must be patient in the face of increased expectancy

Gerry Thornley and John O'Sullivan look at Ireland's second Six Nations match against Italy and what hope, if any, Wales have of toppling England in Twickenham. Pictures: Inpho 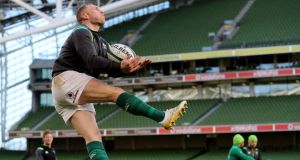 Keith Earls: will be expecting to be part of a potent Ireland backline against Italy at the Aviva Stadium. Photograph: Dan Sheridan/Inpho

This is an altogether different conundrum. A less lubricated, early afternoon crowd have traditionally been treated to Irish tries galore when Italy come to town, but the Azzurri are a proud, obdurate team too and, as Rory Best outlined yesterday, patience may again be a virtue.

Having scored nine tries in each of their last two wins against Italy, and with England and Wales having registered bonus point wins last week, the pressure is on Ireland to atone in one major respect for last week’s tryless outing.

However, warning that Italy might be “hard to break down”, Joe Schmidt ventured: “If it takes a while, I hope the crowd can stay in behind the team. The only thing we can guarantee is that we will be working as hard as we can to keep them entertained and the scoreboard ticking over.

“How we do that? We’re going to have to vary our game and try to keep them guessing. At the same time, we will have to match a fair level of physicality from what they are going to bring.”

But maybe not to the same degree as before. Time was when the Azzurri used to rack up to Lansdowne Road with a big scrum, big maul and big one-off carriers. They once threw down the gauntlet by deliberately knocking on at a kick-off to concede a scrum on half-way with the game’s first play, as if to say: ‘Let’s be having you.’

That scrum threat never materialised, and it’s unlikely to today on recent evidence, most notably week ago when the English pack completely diluted both the Italian’s once-famed scrum and maul, and even put their scrum under pressure at key moments. Sebastien Negri did give them some go-forward, but the great Sergio Parisse is as much a passer these days as a carrier, and their go-forward last week mostly came from their exciting young backline.

Indeed, far from wanting a slow-paced game, under Conor O’Shea, the first Irishman to coach a national side against Ireland in Dublin, this Azzurri team is made for a higher tempo.

Parisse spoke at length of O’Shea’s qualities last night “he’s a smart, intelligent coach” and what he has brought to the Italian team. Noting that they only scored one try in three games last November, the Italian captain added:

“We know Ireland will be a tough opponent and they have a very good defence. But England is a very good team too, and we put them under pressure and scored some good tries, so it’s our ambition as well tomorrow to try to beat that. We want to be more effective in defence, and especially in the contact area, slowing the ball down a bit more too.”

The presence of Alessandro Zanni, for much of his career a flanker, in the second-row is evidence of their pack’s mobility, while their backs have plenty of pace and running threats. They came within a fractionally forward pass of scoring a third try and making it 17-20 against England in the third quarter last week.

Outhalf Tommaso Allan was a minor revelation last week. Under the influence of Mike Catt his talent has begun to flourish and he looks altogether more comfortable at Test level. Although playing deeper than George Ford, Allan ran at the line, and mixed his game nicely, varying short and inside passes with some superb skip passes to bring his outside backs into play.

Tommaso Castello and Tommaso Boni provided plenty of go-forward in midfield, with real pace in the outside three of Mattia Bellini, Tommaso Benvenuti and the 21-year-old Matteo Minozzi. The latter won his first three caps in midfield and on the wing last November but looked born to play fullback last week with his footwork, lines of running and ability to hit the line.

“He has some wicked feet and acceleration,” says Schmidt. “He reminds me a little bit of Jordan Larmour. You’ve got Bellini, another newcomer, who is big, athletic, strong and quick. They are very punchy in the midfield. I know Boni was pointed out as having defensive deficiencies. I’m not sure he can’t solve that.”

Yet it’s true that their midfield defence were bunched all too easily by England, with Boni having a tendency to plant his feet and be too square on. Copying being the best form of flattery, George Ford and Owen Farrell borrowed from the Johnny Sexton playbook with wraparounds last week, and with the additional ploy of a decoy runner, brought their left winger around to create two tries for Anthony Watson in the first 11 minutes.

And if anybody can work the wraparound, along with much else besides, it is Sexton, be it with Bundee Aki, Robbie Henshaw, Tadhg Furlong or whoever. TV pictures cannot convey how sodden last Saturday was in Paris, witness two non-contact, yet season-ending knee injuries.

This is the same midfield that didn’t stop Connacht playing with width and their outside backs scoring tries for fun, and this 10-12-13 axis helped both Jacob Stockdale and Andrew Conway score in the record filleting of South Africa last November.

Granted, today’s forecast isn’t too flash, and it looks like there’ll be rain, but even if team and crowd alike do have to be patient, Schmidt’s selections on the bench are clearly eyeing up the last quarter, when Ireland and others have traditionally dipped their bread.

Sean Cronin, Cian Healy and CJ Stander all bring one common commodity, heaps of ball-carrying ballast. Kieran Marmion brings a razor-sharp sniping threat and Joey Carbery another creative dimension, while the brilliant Jordan Larmour could revel if the game loosens up in the last 20 or 30 minutes.

Form and history have rarely weighed so heavily before a Six Nations fixture.

Italy’s loss to England last Sunday was their 13th consecutive Six Nations match, meaning another defeat will equal their worst ever run in the tournament. Furthermore, whereas they have lost 12 of their last 13 Tests, the sole win coming over Fiji in Catania last November, Ireland have won their last eight Tests in a row.

Accordingly, Ireland are 1/100 and 34-point favourites, and so this is indeed an altogether different level of expectancy.

Forecast: Ireland to cover the handicap.