Ireland close in on U-20s semi-finals after Wales win 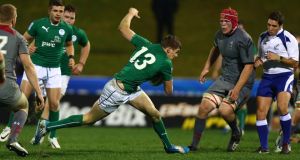 Ireland’s 35-21 victory over Wales this morning coupled with New Zealand losing to South Africa leaves Mike Ruddock’s side on the cusp of qualifying for the Junior World Cup semi-finals.

The hosts’ 33-24 defeat to the ‘Baby Boks’ at the QBE stadium in Auckland and England beating Australia 38-24 means a bonus point win over Fiji in Tuesday’s final Pool game will see the Ireland under-20s qualify as a top four nation for the first time ever.

Earlier, Jack O’Donoghue’s pack recovered from a torrid time in the scrum to create a platform for the Irish backs to run in three of the four tries at the ECOLight stadium in Pukekohe.

Former St Michael’s College outhalf Ross Byrne deserves most of the praise, landing six of eight kicks at goal, including a crucial penalty in the 60th minute.

Byrne was instrumental in many of Ireland’s best play, starting with his cross field kick after three minutes, which was gathered by Galwegians winger Ciaran Gaffney. The pack arrived en masse and prop Rory Burke powered over.

Former Blackrock centre Garry Ringrose, who like Byrne is now representing UCD, completed the perfect start when crossing for the first of his two tries after 10 minutes.

But the dominant Welsh scrum got its just reward before the break when Ireland loosehead Peter Dooley was sin-binned with the resulting penalty try and Angus O’Brien’s conversion cutting the lead to 17-14.

Matters got worse for Ruddock’s injury cursed side - who already lost two captains in Dan Leavy and Sean O’Brien before the tournament - when winger Alex Wootten was yellow carded for kneeing the Welsh outhalf in the back.

However, Dooley’s return sparked a dramatic revival, allied by some Trojan work from Leinster lock Ross Molony and the entire Irish backrow, with Ringrose holding off two tacklers to finish off a fine team try.

Byrne’s conversion made it 24-21 before his penalty from the left touchline put Ireland in a commanding position entering the final quarter.

Victory was secured nine minutes from time when Byrne’s boot made it 30-21 as Wales centre Jack Dixon headed to the sin-bin.

The crucial score came in the 76th minute when a sumptuous offload by Ringrose saw fullback Cian Kelleher sprint over for the fourth try to ensure a complete reversal from the 19-13 defeat to France.

Kelleher’s try leaves Ireland on six points meaning a bonus point win over Fiji on Tuesday (kick-off 2.35am Irish time) would relegate Australia and New Zealand to the plate semi-finals.

1 Seán O’Brien: Anger over my parents’ break-up never left me
2 Dan Martin keeping it day-to-day as Vuelta proves challenging for riders
3 Gibson-Park, Earls and Kelleher all in race to make Ireland’s French finale
4 Madness or defiance? The GAA is taking a huge gamble in staging Championships
5 Peter O’Mahony ready to battle his way back into Ireland’s backrow
Real news has value SUBSCRIBE