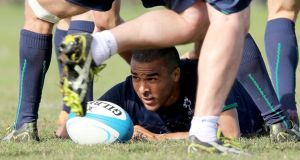 Simon Zebo hard at it during the Ireland rugby squad training session at Tucumán Universitario Rugby Club ahead of the second and final Test against Argentina. Photograph: Dan Sheridan/Inpho

There is a sense of this being a bit more like the real deal. Both sides expect improved performances on last week’s first Test and although football is the main game in Tucumán like everywhere else in Argentina, it is also a rugby stronghold and with everyone talking up this game more, yesterday’s captain’s run at the Estadio Monumental José Fierro whetted the appetite.

The home ground of the Club Atlético Tucumán football side, the pitch is superior and although the dressingrooms are outmoded and cramped, the players will emerge from a tunnel on to the pitch to face a passionate home crowd in the equally decaying and steepling blue and white painted stands. We are assured it will rock.

“There’s a cauldron feel to the stadium with the high walls,” said scrum coach Greg Feek at pitchside yesterday. “It’s going to be loud, it’s going to be good, a good atmosphere. The boys are excited about that.”

Ireland tend not to sign off seasons with their last game of summer tours in strong fashion; one only has to think back to the Hamilton Horror Show of 2012 (60-0, in the unlikely event of us forgetting), but there’s been little sign of fatigue or minds being in holiday mode for the pre-booked flights to all corners of the globe tomorrow morning.

“We’re all pretty driven to finish well and the performance is what we’re looking for, a really good performance from the boys,” said Feek, “and hopefully that’ll get us a win.

“ I don’t think complacency’s an issue, we just want to perform well. It’s disappointing when you don’t get out there and perform well.”

Interestingly, when the IRFU dignitaries met with their Argentine counterparts the night before the first Test, the latter were adamant the Pumas would lose the first Test, but win the second.

They have made only two changes, and the absence of number eight Benjamin Macome looks a blow, and they had the advantage of playing three Australian super rugby sides as well as routing Uruguay and Chile in the weeks leading up to the first Test.

Yet as Paul O’Connell has forewarned, very often it’s very difficult to reprise the set-piece dominance Ireland enjoyed last week in these back-to-back games. Huge emphasis on their scrum One imagines the Pumas will have placed a huge emphasis on their scrum all week, such is their pride and reputation in that area and they will have learned more about the Irish lineout as well, which has gained with the return of Devin Toner, even if losing the option of Robbie Diack.

Joe Schmidt also anticipates that with more ball to play with, and given the creativity of Martín Landajo and Nicolás Sánchez, Argentina will play with more ambition and seek to bring the dangerous Manuel Montero (last week’s cracking try being his 12th in 11 Tests) and the recalled Lucas González Amorosino into play.

Yet even if they don’t repeat their set-piece dominance, Ireland will expect to improve in other areas, notably in executing one-on-one tackles, especially in the backline, and in translating line breaks and excursions deep into Argentine territory into points.

“The good thing is we have a couple of changes in the forward pack and those boys who are coming in are keen to prove a point as well,” said Feek.

“We’re under no illusions it’s going to be tougher than last week, they’ve seen what we can do and will probably want to make amends for a couple of things that didn’t go right for them.”

Despite this being a more experienced line-up (Ireland’s 565 caps dwarfs Argentina’s 191, opportunity knocks again for a number of players. On a huge weekend for his family given his dad Mike takes his Under-20s into Junior World cup semi-final battle tomorrow against England, Rhys Ruddock makes his first Test start.

This will only be Simon Zebo’s eighth Test, and more pertinently, his second under Schmidt, who was notably more complimentary about the Munster winger on Thursday, both in his defensive reading and tackling, as well as his attacking, and will be Darren Cave’s sixth Test start and first at inside centre, not to mention three uncapped players on the bench in Rob Herring, James Cronin and Noel Reid.

Although Argentina won in Italy last November, and have won 11 of 14 matches under Daniel Hourcade, they have lost 13 in a row against currently ranked top 10 opposition.

Admittedly, in such a seething atmosphere, one has to factor in a French referee, Pascal Gauzere, for what will be his 13th full international.

He did take charge of Argentina’s 31-12 loss against England in November 2013, but this will be his first Ireland test.

Even so, it will be disappointing if Ireland don’t sign off an excellent season with a flourish.