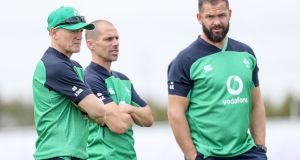 Joe Schmidt and the Irish coaches have rarely had the welcome dilemma of choosing from a full deck in midfield, but in the anticipated absence of Robbie Henshaw from Ireland’s pivotal Pool A opener against Scotland in Yokohama on Sunday (kick-off 4.45pm locally/8.45am Irish time) at least they won’t be forced to play an unfamiliar combination.

Necessity being the mother of invention, such has been the regularity with which the Ireland number 13 has been unluckily struck down (a jinx that goes back to Jared Payne at the last World Cup) that in his 20 Test starts Bundee Aki has partnered Garry Ringrose eight times and Chris Farrell on five occasions, as well as Henshaw six times and Will Addison once.

“At this stage, they’ve all slotted in,” said Joe Schmidt at the squad’s base in the Chiba prefecture about 40km southeast of Tokyo.

“Yesterday [Saturday] we didn’t train for particularly long as a team. We probably trained for about 30 minutes, so it wasn’t a long training and in that 30 minutes guys went in and out. So, we believe that Bundee can play 12 and so can Chris, and Chris can play 13 and so can Garry Ringrose.

“When we played Scotland earlier this year in the Six Nations, Bundee and Chris played together and did a good job. So we know that last year, Garry came in cold after Chris had been player of the match against Wales and played very well against Scotland.

“So in recent times they’ve both got form against Scotland specifically and we know the different strengths they bring to the game. So we’ll keep an eye on that weather forecast and we’ll see what we feel is the best decision for the team,” added Schmidt, referring to the forecast for torrential rain for Yokohama this weekend, in contrast to the 32 degrees forecast today.

“You always hope against hope and I’m hoping it was just cramp and the travel and things and that Robbie’s not too bad, and as much as I say I’d be very surprised if he’s in, I wouldn’t completely rule him out as yet.”

The results of Henshaw’s scan after he pulled up in training on Saturday with a sore hamstring were expected this afternoon Japanese time – about 7am Irish time. But the indications were that Henshaw would not be ruled out of the tournament. Schmidt emphatically stated yesterday that Will Addison, taken out of Ulster’s starting line-up as a precaution in their pre-season friendly in Glasgow on Saturday and then an unused sub in the team’s 36-33 defeat, had not been called up.

There was, at least, better news with Joey Carbery seemingly set to be on the bench, although Keith Earls remains a doubt after suffering that bang on his quad against Wales. The changeable weather is another fly in Schmidt’s ointment, although that of course will be the same for Gregor Townsend and both teams. The general feeling may well be that if the forecast holds true, that will more likely favour Ireland.

Nonetheless, it would be a disappointment, after all the years of planning and the build-up, that such a huge game would be played in a downpour, with all the potential consequences for the game as a spectacle.

Schmidt spent much of his birthday in the air last Thursday, and the long-haul travel has perhaps contributed to him not shaking off the heavy cold which hit him in the week of the last warm-up against the Welsh. Facing into one of the defining games of his 6 ½-year reign, Schmidt’s respect for his counterpart Townsend and the Scottish team has never wavered.

Although Ireland have a good record under Schmidt against the Scots, winning six of seven meetings, save for the 40-10 Six Nations title decider they have always been decidedly tricky opponents.

“I don’t think they’ll be much changed because they’ve always been really competitive, and while we’ve managed to get our noses in front it was a little bit fortuitous the last time we played them,” said Schmidt, in reference to the manner in which Conor Murray pounced after Tommy Seymour’s attempted tap down missed Sean Maitland. “So they’ll know that they’re good enough.”

“We expect that they can play across the board. Finn Russell brings an incredible variety to his kicking and passing game, and he’s a threat when he’s running as well, as is Adam Hastings. So either of those guys will set the game up well with them.

“They’ve got the steady hand and the experience of Greig Laidlaw and his outstanding goal-kicking, as opposed to Ali Price and the change up and the threat that he poses. We saw him as outstanding for Glasgow at times, causing real grief for some of the provincial teams from Ireland.

“They have a strong back row. It will be interesting to see if Blade Thompson is included,” said Schmidt, given the presence of Hamish Watson, John Barclay and Ryan Wilson. The Ireland coach also went through their many options in the back three, such as Seymour, Maitland, Blair Kinghorn, Darcy Graham and Stuart Hogg. “He’s an electric player for them.”