Schmidt: ‘Hopefully, after today, they’ll appreciate they can live up to these big matches’ 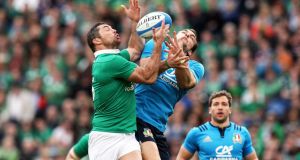 Ireland’s Rob Kearney with Edoardo Padovani of Italy at the RBS 6 Nations Championship Round 2 in the Stadio Olimpico in Rome, Italy. Photograph: Billy Stickland/Inpho

After the Murrayfield hiccup, the weekend couldn’t have gone much better for Ireland. Following on from their record Six Nations win and the competition’s first attacking bonus point in Saturday’s 63-10 victory over Italy, France’s 22-16 success over Scotland in Paris yesterday left Joe Schmidt’s team in clear second place after two rounds.

Ireland also remain the bookies’ clear second favourites to win the title before hosting France at the Aviva Stadium in a fortnight’s time, albeit England’s odds have hardened to retain the trophy after their last-ditch win away to Wales leaves them in pole position. Eddie Jones’ team now entertain Italy and Scotland at Twickenham before the tournament’s finale on the last weekend in Dublin.

8 Almost 6,400 healthcare staff are off work due to Covid-19 as hospitals face virus peak

9 ‘I got a burning smell in my nose’: Third-wave Covid-19 patients share their experiences

10 Homeschooling is an utterly unworkable solution for so many

14 Nuns who ran the Bessborough home in Cork sold part of site for €6.85m

19 Is paying someone to clean your house the last word in middle-class privilege?

22 Letter from Saudi Arabia: ‘The Irish here are all in the same boat’

23 Una Mullally: Will Lockdown 3.0 bring about a political awakening?

31 Lockdown’s silver linings: ‘I’m looking at the world with a kind of newness I had forgotten’

32 High levels of public investment to be maintained for coming years, Donohoe says

33 How did Ireland jump from low Covid base to world’s highest infection rate?