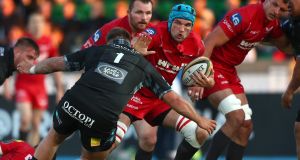 Scarlets’s Tadhg Beirne in action against Glasgow Warriors in the Pro14 semi-final. The 26-year-old has been called up to the Ireland squad for the tour to Australia. Photograph: James Crombie/Inpho

The windows of opportunity between now and the 2019 World Cup in Japan in 16 months’ time are shrinking, with just this summer’s tour, November’s four matches and the Six Nations to come before the World Cup warm-up matches.

Viewed in that light, the selections of Tadhg Beirne, John Cooney and Ross Byrne in the 32-man squad for the upcoming three-Test tour to Australia look the most significant.