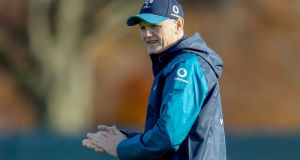 So it begins then, the long goodbye. And it’s not just Joe Schmidt, who is coming into his sixth and last Six Nations as Ireland’s head coach.

Ditto Warren Gatland, for whom this will be a remarkable 12th and last as Wales head coach, which thus makes it his 16th championship in total when taking into account his four with Ireland.

1 Ireland among countries urged to consider reinstating Covid-19 restrictions
2 Lowest numbers in two weeks as one more Covid-19 related death and 35 new cases reported
3 ‘I’ve been sleeping with my girlfriend’s sister. I need help. What do I do?’
4 Ward at Naas General Hospital closed due to suspected Covid-19 outbreak
5 Russia set to begin Covid-19 vaccinations within weeks
6 Former Sinn Féin member apologises for anonymous social media abuse
7 Irish Michelin two-star restaurant to sell kebabs and fries from takeaway trailer
8 Council closes Salthill diving tower over social distancing problems
9 Minister promises Leaving Cert students grades will be assessed fairly
10 Fintan O’Toole: Turning a blind eye to meat plants a very old habit
11 Revised help-to-buy scheme opens for applications
12 Government begins work on new medium-term plan in Covid-19 era
13 Talk of a Covid-19 vaccine by spring of 2021 is just too soon
14 French and Dutch on alert over rise in coronavirus cases
15 Maura Higgins: ‘I really hated it. Apart from that massage, the rest of it can kiss my ass’
16 Senator Lynn Ruane: I had a few wild years. Pregnancy calmed me down
17 Stripe lures Dhivya Suryadevara from General Motors to be CFO
18 Should we hand over the deposit for a house before getting all the documents?
19 ‘No demand... because there are no people’ at well-known Dublin pub
20 Meteor shower: watch out for nature’s most spectacular annual show
21 Co Meath creche closes after five Covid-19 cases confirmed
22 More than 100,000 Scottish exam grades to be reinstated after row
23 Heroic insanity: When Michael Dunlop raced home in memory of his father
24 North’s Minister for Health expresses concern amid rise in Covid-19 cases
25 Divorce: What will it cost and can you afford it?
26 Not the shopkeeper’s job to enforce mask regulation – Healy-Rae
27 Sinn Féin apologises as member resigns over social media abuse
28 Stephenie Meyer on Midnight Sun: ‘This was just a huge, pain-in-the-butt book to write’
29 Coronavirus: Non-essential travel from US set to be banned within days
30 New Zealand’s largest city in lockdown after first coronavirus cases in 102 days
31 Northern Ireland-born British and Irish win EU citizenship rights
32 When will the first Covid-19 vaccine be used in Ireland?
33 ‘We can be fined how much?’ Shoppers mask up in Dublin city centre
34 Religious oaths must be removed from State activities
35 Shels chairman Andrew Doyle hits out at ‘appalling’ FAI governance
36 AIB concedes Covid-19 mortgage policy was ‘regrettable’
37 Belarusian opposition defiant as leader flees and violence grows
38 Sturgeon threatens Scottish football shutdown after Celtic player’s trip to Spain
39 ‘We feel we are in limbo’: Wedding plans in chaos due to Covid-19
40 ‘Customers are very confused’: Motor dealer outlines EV reality
Real news has value SUBSCRIBE