Fresh injury worries for Boks ahead of All Blacks match 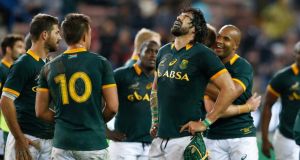 Victor Matfield is an injury doubt for South Africa ahead of their upcoming New Zealand game. Photograph: EPA

The key pair, along with prop Jannie du Plessis and experienced number eight Schalk Burger, will all be assessed before the game but Matfield’s hamstring strain and Coetzee’s bruised knee are causing the most concern.

They sustained the injuries in the Springbok’s heart-breaking 24-20 loss to Australia in Brisbane on Saturday and are the latest in a lengthy list that have hurt their World Cup preparations.

“Both are doubtful to play this weekend, but luckily neither of them are in doubt to miss the World Cup,” Bok team doctor Craig Roberts told reporters on Monday.

“Jannie du Plessis and Schalk Burger also picked up knocks in Brisbane on Saturday and we will reassess them at our first training session of the week on Tuesday.

“Apart from a lot of bumps and bruises, the rest of the squad should be fit for selection.”

Highly-rated lock Pieter-Steph du Toit will join the squad in Johannesburg later on Monday and his progress will also be reassessed.

With only three fit second-rowers left in the squad, coach Heyneke Meyer has decided to call up Flip van der Merwe, who had earlier in the year ruled himself out of contention for selection.

“Flip is very experienced and can cover both lock positions, so it made sense to pro-actively assess our options and bring him in,” said Meyer.

“We’ve had a great discussion and he has made himself available to play for the Springboks, which I’m very grateful for. Flip has always put his body on the line for the Boks and it will be great to have him back in the fold.”

Regular captain Jean de Villiers played another 60 minutes on his return from long-term injury when he featured for Western Province in a pre-season friendly on Saturday.

Although he showed no signs of discomfort, Meyer says their leadership crisis in the team will not see the centre rushed back.

“The plan was never for Jean to play against Australia and New Zealand and even though Victor and Schalk are injured, we’re not going to rush him back,” Meyer said.

“If Victor can’t play on Saturday, we’ll make a call on the captaincy and announce it when the team is named on Wednesday.”