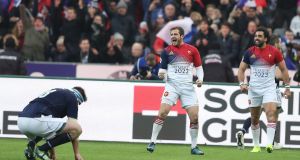 At face value, France may not appear to have made huge strides under Guy Novès. In his dozen games as head coach, France have won five and lost seven, and Novès has used 54 players. But appearances can be deceptive.

In his first 10 games in charge, when using 53 players, on average Novès made six changes from one Test to the next. But the starting XV to face Ireland is quite likely to feature just one enforced change, with Clermont flanker Damien Chouly returning in place of La Rochelle’s Loann Goujon, who sustained a fractured sinus in the win over Scotland last Sunday.

If so, this would also mean Novès reverting to the same starting XV which lost 19-16 to England at Twickenham. In other words, 14 players could be ever presents in their starting team in the Six Nations come the kick-off at the Aviva Stadium.

Admittedly Novès was forced to radically change his squad for the two-Test tour to Argentina last June as it clashed with the Top 14 playoffs.

For France to arrive in Dublin with such a settled team and squad is, according to the Grenoble head coach Bernard Jackman, “unheard of since the Bernard Laporte days”

The 28-man squad was only finalised after Toulouse and Castres and were eliminated from the Top 14 quarter-finals, and apart from Clermont’s Paul Jedrasiak, no players from Racing, Toulon, Clermont or Montpellier featured.

Six days later, again in Tucuman, Novès made seven changes to his starting line-up for an eye-catching 27-0 win; and last November, after a 52-8 win over Samoa, Les Bleus ran Australia and New Zealand close in 25-23 and 24-19 losses.

The Clermont outhalf Camille Lopez was recalled against the All Blacks for his first Test start in 19 months and on foot of that Novès has settled upon Serin and Lopez for this Six Nations.

For France to arrive in Dublin with such a settled team and squad is, according to the Grenoble head coach Bernard Jackman, “unheard of since the Bernard Laporte days”, which preceded the ill-fated reign of Philippe Saint-André.

Laporte, elected as the new president of the French Federation last December, has long had a poor relationship with Novès, and it was anticipated Laporte would waste little time in firing Novès.

But an uneasy truce has ensued which, for the time being, is benefiting France. True to his election campaign promises, one of Laporte’s first decisions was to abandon the plans of his vanquished predecessor Pierre Camus to build a new €600 million stadium and instead invest in the grassroots and compensate the clubs for player release.

Novès could rest players from the Top 14 before the tournament opener against England, and will do so again this weekend. There’s also a sense Les Bleus are again playing for their head coach and the jersey.

They have been getting closer to a major scalp, losing by one score to Australia, New Zealand and England – the top three ranked sides in the world – in successive Tests. In those three games, they made 48 line breaks and 78 offloads.

They came within a finger tip, literally, of pulling two scores clear of Scotland last Sunday when Rémi Lamerat was denied a try in a marginal call and hence, not surprisingly, there was a palpable tension in the endgame before Lopez landed two clutch penalties to earn a 22-16 win.

While allowing for Ronan O’Gara’s critique of Lopez at half-time, in tandem with Serin, he appears to have solved a long-term half-back riddle, and looks altogether more complete than Jean-Marc Doussain, Jules Plisson and even Francois Trinh-Duc.

“Lopez was good,” maintains Jackman. “Lopez hit the ball flatter than any outhalf has done this season. Leading up to [Gael] Fickou’s try, he got four touches and he accelerated onto the ball and took it right under the noses of the defence.

“Lopez doesn’t have the experience of Johnny [Sexton], [Owen] Farrell or [Dan] Biggar, or Rog had, and it’s not easy to put his mark on the team. I looked at it again, and he wasn’t that bad. In actual fact, he did some good stuff and he also kicked incredibly well against England under pressure.”

To date, France have not been playing with the same flair as they did last November, but the confidence gained from last week’s win makes them, like all French sides, that much more dangerous.

“This French team is far from the finished article,” says Jackman, “but they’ve got a pretty powerful scrum, as do Ireland, and a lineout maul.

“Interestingly, unlike other teams who like to maul and break out laterally with the player at the back of the maul, they kind of cabin-pull [Louis] Picamoles through the middle of it. So there’s a slight shift in the drive and next thing Picamoles comes flying out of the maul at your nine, and he’s got the capacity to hand-off or offload. It’s quite a dangerous weapon.”

This, along with the game plan, is the hallmark of Yannick Bru, who is more the hands-on coach, with Novès more of a motivating, managerial figure.

“They play a 1-3-3-1,” says Jackman in describing how they align their eight forwards in open play.

“Historically, their forwards were half following the ball and half not knowing what to do, and this made it more difficult for them to run quality lines and easier for defences to shut them down, and they looked lost.

“Now they have this shape, that Australia play. They play [Guilhem] Guirado invariably on the left and Picamoles on the right, and then they have their other forwards inside split into two groups of three. So instead of chasing the ball all the time, they’re keeping their energy to go north-south. It’s not perfect, but at least now everybody has a role and the defence has to respect different options. It’s making their power game easier to implement.”

Their defence has also improved. “They work much harder, their spacing is better and they’re capable of making big hits,” says Jackman, albeit their discipline is poor if teams take them through phases and frustrate them, as Ireland do so well.

While Novès has said the days of playing with traditional French flair cannot be replicated, this team has sought to marry the Toulouse offloading game with a range of powerful, dynamic carries. However, when the offloads don’t go to hand, they have been criticised.

“There are going to be more errors when you play with that kind of abandon, but there was huge pressure on them to beat Scotland. But they got the win and now there’s a feel-good factor. Against Ireland there is less pressure on them. It’s almost seen as a free hit. ‘Let’s go to Ireland and have a cut.’ And that’s what you don’t want when facing a French side.”

France appear to be on the way back.