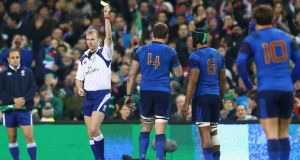 Pascal Papé has been cited for his knee to the back of Jamie Heaslip during Ireland’s 18-11 Six Nations win over France at the Aviva. (Photo by Michael Steele/Getty Images)

Pascal Pape has been cited for striking Ireland number eight Jamie Heaslip with his knee during Saturday’s Six Nations Championship match at the Aviva stadium. Heaslip is believed to have suffered broken vertebrae as a result and could be sidelined for a month to six weeks.

The former French captain received a yellow card from referee Wayne Barnes after the official had consulted with the television match official and watched replays of the incident on the big screen. Barnes adjudged Pape’s action to be intentional, using the word ‘deliberate’ when brandishing the card. How it wasn’t a straight red, given the referee’s summation, remains a mystery.

French coach Philippe Saint-Andre claimed that Pape’s act was not intentional but the independent citing commissioner, Italy’s Stefano Marrama did not agree and he will appear before a Six Nations disciplinary committee hearing later this week.

Saint-Andre had claimed: “When you watch the images of the incident I don’t think you can say it was deliberate. However, I said to Pascal you received a yellow card just at the moment we were gaining the upper hand both physically and territorially as we were in their 22.

“Although we didn’t concede many points it was still a pivotal moment. You expect something like that from an inexperienced player, not one with over 50 Tests under his belt. It was the worst possible moment for that to happen.”

The statement read: “Pascal Papé, second row forward for France, has been cited by the independent citing commissioner at the RBS 6 Nations match between Ireland and France in Dublin on Saturday, for the incident in the 52nd minute of the match for which the player received a yellow card.”

Meanwhile Manon André, the France women’s secondrow was also cited following the match against Ireland women in Ashbourne on Friday evening under Law 10.4(m), which states: “A player must not do anything that is against the spirit of good sportsmanship in the playing enclosure. (Alleged contact with Eye(s) or the Eye Area.)

“Both players will appear before independent Six Nations Disciplinary Committees of three later this week.”