2007 World Cup winner back in the fold, skipper Kolisi out of Rugby Championship 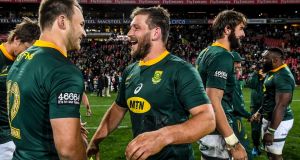 Rugby World Cup winner François Steyn admits he was a bag of nerves before his return to the South Africa side in their 35-17 Rugby Championship victory over Australia on Saturday as he targets a late push for a place in the Springboks’ World Cup squad.

Steyn lifted the Webb Ellis Cup in France 12 years ago, but has 56 caps in 13 years, often in and out of the side at the whim of coaches and sometimes himself. It was his first appearance since June 2017.

But his experience and versatility is attractive to current coach Rassie Erasmus, who selected Steyn last year, only for the Montpellier player to withdraw from the squad with injury.

“I was nervous,” Steyn said after a 30-minute appearance off the bench at Ellis Park. “My wife was pacing up and down at the hotel before we left for the game. Watching her made me nervous.

“When we started to warm up at Ellis Park, I calmed down a little bit.”

Steyn can play flyhalf, fullback and inside centre, but believes the latter position is his best as he looks forward to making up for past disappointments in a career that has perhaps not seen him fulfill his rich potential.

“I’ve been around and I’ve had my bad years,” Steyn said. “Careers have ups and downs. It’s one of those things. Mine has gone up and down, as everybody in this room knows.

“I’m actually happy that I didn’t start against Australia, because I’ve been in the squad for just two weeks and I’m still trying to get used to all the structures.

“I can’t say we don’t get coached that well in France, but Rassie and his team have really stepped up. They’ve done a great job.”

Steyn says he is not sure where he stands in terms of World Cup selection, but adds that the fact that the Boks beat Australia with essentially a second-string side shows the depth in the squad.

“Two years ago, who would have thought we would beat Australia like this? I was sitting in France, and I wouldn’t have predicted this, even if I was in the squad.

“It’s just unbelievable what Rassie and SA Rugby have done. It’s unbelievably special for the players.”

Steyn is expected to link up with the Boks who are already in New Zealand for Saturday’s Rugby Championship clash as Erasmus takes a 34-man squad to Wellington.

“It will be a massive game. We’ll have to wait and see if I get picked. If I don’t play, I’ll be there supporting the guys who do.

“If I play, I’ll try my best. During my time here there probably will be some screw-ups. But I’ll do my best.”

Meanwhile South Africa captain Siya Kolisi will take no part in this year’s Rugby Championship after he was left out of the squad for the remaining matches away in New Zealand and Argentina.

Loose-forward Kolisi is recovering from a knee injury sustained for the Stormers in Super Rugby in May, with his priority now to be ready for the Boks’ opening game of the Rugby World Cup in Japan against New Zealand on September 21st.

The Boks announced a 36-man tour party for both games, with the team to camp in New Zealand after Saturday’s clash in Wellington, and then head to Argentina for their final game of this year’s competition in Salta on August 10th.