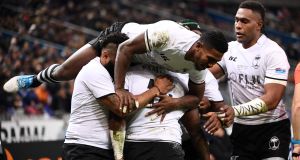 Fiji pulled off a remarkable Test triumph on Saturday with their first win over France, getting home 21-14 in front of a stunned Stade de France crowd in Paris.

Both sides scored two tries but Fiji’s French-based flyhalf Ben Volavola added 11 points from the boot to prove the difference as the Pacific islanders held France scoreless in the second half to complete a rare success over a top-tier nation.

Fiji will go to next year’s World Cup as dangerous outsiders with the ability to disrupt the established order. French rugby, meanwhile, faces more introspection after a disappointing 2018.

Semi Radradra broke two tackles before stretching his hand over the line for the opening try in the 20th minute as Fiji got deserved rewards for their early efforts.

Swept aside 54-17 by Scotland a fortnight ago, Fiji looked much more determined this time although their forwards were again overwhelmed at times.

But parity lasted just six minutes as Fiji responded with power and strength, throwing in touches of their sevens flair with a hanging pass and a run with the ball in one hand on display before France-based winger Josua Tuisova went over.

Then 34-year-old winger Vereneki Goneva, who plays for Newcastle Falcons, was unlucky to be adjudged offside after sprinting almost half the pitch to cross the line in the 37th minute in one of several tough calls against the Pacific islanders.

France stretched the first half with five minutes of added time in their bid to take the lead with Guirado eventually scoring a carbon copy of his earlier try for a 14-12 home half-time lead. But any thoughts that Fiji might capitulate after the break disappeared quickly as Volavola kicked two penalties to see Fiji 18-14 ahead before Tuisova dotted down for a try that was then disallowed. A television review revealed a late tackle by lock Tevita Cavubati in the build-up to the score.

France were under constant pressure from the free-running Fijians, whose errors were as exasperating as their flair was enthralling.

The home side rallied in the closing stages but the Test ended with Fiji fittingly near the French line where they won another penalty that Volavola put over with the last action of the game.

France had won all nine of the teams’ previous encounters. They have won just three of their 11 matches in 2018.