England flood through as Ireland run out of steam and bodies 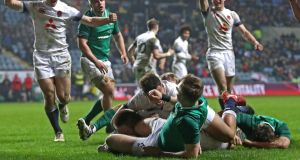 England’s Joe Heyes score a try during the Under-20 Six Nations Championship match against Ireland at the Ricoh Arena in Coventry. Photograph: Tommy Dickson/Inpho

The final scoreline seems ludicrous when parsed against the first 60 minutes of the contest at which juncture Ireland trailed by seven points, 22-15, but they were eviscerated in the final quarter as the home side pillaged a staggering 26 points without replay as the visitors ran out of steam and bodies – the physical toll monumental.

England are a cracking side and played some brilliant rugby, deserving winners if not perhaps by as wide a margin. Two Irish players, Seán Masterson and Eoghan Clarke left the pitch on stretchers and Ireland played nearly a quarter of the match at least a man down, not including those who could barely walk never mind run. But there was no questioning their character despite the heavy pummelling in the end. Ireland didn’t score a point in the second half.

Ireland lost Eoghan Clarke from the starting line-up, the hooker split his mouth in the warm-up, and in order to give the medical team time to stitch up the Wanderers man, Diarmuid Barron was promoted from the bench. It didn’t discommode the visitors as they tore into and took the game to England, the only downside turning over an early lineout, five metres from the home side’s line.

Angus Curtis continued to demonstrate the exquisite footwork and running lines to shimmy his way past two England defenders and fire out a great pass to Angus Kernohan but the Irish wing was bundled into touch in the corner as the England scrambled to nullify the initial breach.

Ireland took the lead on seven minutes when outhalf Harry Byrne’s beautiful dab kick was recovered by Tommy O’Brien, the Irish captain appreciating James Hume’s inside clever inside line to provide his team-mate with a scoring pass. The outhalf couldn’t add the difficult conversion.

This young Ireland team play some cracking rugby and for the second time in the match Silvester demonstrated dazzling footwork to thread his way past multiple defenders and link with Hume. The attack eventually petered out but as England ran ball from their 22, O’Brien read English centre Fraser Dingwall’s pass, intercepted it, and cantered in under the posts. Byrne tagged on the conversion.

The Irish outhalf, though, was to put his side in real trouble with a poorly judged kick, eventually rescued by Hume’s superb covering tackle that prevented Loader from grabbing a second try. It was a short lived respite as 90 seconds later, a superb break from English fullback Jordan Olowofela was finished off by Dingwall. Hardwick converted and the sides were level again at 12-12.

It was a rip-roaring opening quarter as both sides unloaded their attacking patterns at every opportunity, irrespective of field position. Ireland conceded a scrum penalty on 24 minutes and England for the first time in the match pointed to the posts and Hardwick duly obliged with a belter from the Irish 50-metre line. The visitors had earned their hosts’ respect.

Ireland displayed some wonderfully nuanced attacking play, the pack making the hard yards and twice Ireland expanded their patterns to the touchline corridors; Byrne’s cross-kick on a penalty advantage was overcooked for Kernohan but when play was called back the outhalf landed the straight-forward kick to leave the sides level, 15-15 at the interval; a riveting contest and Ireland’s best half of rugby, in all-round terms, in the tournament.

It wasn’t without glitches, the set piece of scrum (three penalties in the first 50 minutes) and lineout, misfired occasionally, some of Byrne’s decision-making and execution was questionable but in fairness to the outhalf, he never batted an eyelid and kept looking to manage the game in a positive vein.

The accuracy of Ireland’s long passing was especially impressive, the timing occasionally a nanosecond off, in the sense of early release without fixing the defender; a minor cavil. England had one try disallowed but a length-of-the-pitch effort finished off by Ben White came from an Irish turnover deep in the English 22.

O’Brien took a yellow card for the team with a pull back following a misplaced pass and during his absence the home side secured a bonus point with a fourth try from Joe Heyes, a fifth from Gabriel Ibitoye; 14 points while the Irish captain was in the sin bin became 21 shortly after his return and 28 soon thereafter, Ireland finishing the game with 14 players due to the wear and tear.