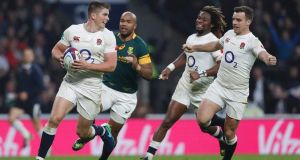 England ended their decade-long wait for victory over South Africa with a resounding 37-21 victory at Twickenham that extends their winning run to 11 Tests.

After 11 defeats and a draw in their previous 12 meetings dating back to 2006, Eddie Jones’s men put the Springboks to the sword through tries from Jonny May, Courtney Lawes, George Ford and Owen Farrell.

May marked the conclusion of his injury-enforced spell in the international wilderness by finishing a slick score originating from a lineout, while Lawes celebrated his 50th cap by using his athleticism to complete an opportunistic counter-attack.

Elliot Daly’s full debut at outside centre mixed good with bad after the Wasps man initiated the move that led to Lawes crossing and landing a long-range penalty, but he was also thrown around on occasion.

Head coach Eddie Jones branded South Africa “bullies” in the build up and described their rugby philosophy as “chess with steroids”, but these Springboks are a poor team who finished the match a disorganised mess.

The rope-a-dope tactics Jones had said would be required to absorb the pressure from the tourists’ big ball carriers were only necessary for half an hour, by which point England were in full control.

It was an ugly spectacle at times but the Grand Slam champions, who have amassed 10 wins under Jones, were able to bring Twickenham to its feet with flashes of brilliance, among them two dummies from scrumhalf Ben Youngs.

Indiscipline resulted in England making a poor start as they conceded three penalties inside the opening five minutes alone, enabling South Africa to take a 6-0 lead through Pat Lambie’s boot.

An attacking lineout provided them with the platform to hit back, however, with Marland Yarde roaming infield to create an overlap before combining with Mike Brown to send May racing over in the left corner.

It was a slick response from England given the damp conditions, but for the second time in the opening quarter they allowed South Africa to surge through the middle of the ruck with Vincent Koch rampaging in the footsteps of Tendai Mtawarira before him.

Combined with a scrum that came apart at the seams, England were coming under sustained pressure and Lambie was able to land another three points.

A bulldozing run from Billy Vunipola generated momentum and with South Africa producing two poor kicks, England were able to spend a significant spell in the opposition 22 until Ford sent a drop-goal wide.

Now there was conviction about their play as Ben Youngs made a forceful break that established field position under the posts and in the process a head on head collision between Billy Vunipola and Eben Etzebeth ended the giant Springbok lock’s afternoon.

A collapsed scrum allowed Farrell to land a penalty and the lead was extended to 17-9 following a sharp counter-attack that started on the 22 with Daly kicking into space and May and Brown hacking on before Lawes arrived to touch down.

Daly landed a monster penalty from close to the halfway line to create more daylight between the rivals and with half an hour remaining the outcome was beyond doubt.

Youngs was almost at a stroll as he exploited a gap at the breakdown, easily duping flanker Pieter-Steph du Toit with a dummy before supplying Ford with the scoring pass for their third try.

After a period of meandering, England were stung by seeing Johan Goosen link with Willem Alberts for the Springboks’ first try and touched down for a fourth time with Youngs selling another dummy with Farrell on hand to finish on this occasion.

South Africa had the final say when Willie le Roux dotted down in the corner, but the contest had long since been decided.