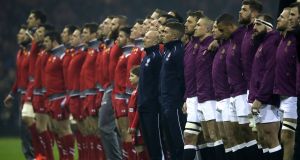 Players from England and Wales do not enjoy the same tense rivalry as in the past. Photograph: Getty Images

Nationality should be a wonderfully simple concept in weeks like this. When England meet Wales in next Saturday’s pivotal Six Nations fixture it will be as much a clash of clans as a game of rugby. Few fans experience the calm of cross-border neutrality; by kick-off the red and white tribal divide makes the Severn Estuary feel as wide as the Atlantic.

On the field, though, things are less clear-cut. Ross Moriarty, the Wales squad member, was playing for England Under-20s in 2013 alongside Anthony Watson and Jack Nowell. Moriarty’s team-mate Tomas Francis is a native Yorkshireman now resident in Exeter. The Vunipola brothers spent their formative years in Pontypool, where Mako developed a distinct Welsh accent.

Further down the representative pyramid is Mat Protheroe, a Swansea lad with no formal English heritage now playing outhalf for England Under-20s. The England Under-18 side is currently being led by Harry Randall, a fleet-footed scrum-half who captained Wales Under-16s in 2014. Wales are even set to cap Ian Botham’s grandson James at Under-18 level this year. Modern rugby union is increasingly a game without frontiers.

The blurred lines are being exacerbated by World Rugby’s creaking eligibility regulations. Things are now so baffling that France briefly called up David Smith, the Samoan-born winger, to their Six Nations squad, unaware he had represented New Zealand at sevens in 2008. The three-year residency rule, which blatantly favours countries with thriving professional club leagues, is also about to deliver the marauding Nathan Hughes into England’s hands this summer. Their Celtic neighbours have little option but to trawl the world for anyone - WP Nel, CJ Stander etc - prepared to do likewise.

Lately, though, the cross-border traffic has been getting younger. Take the 19-year-old Protheroe. His lack of English ancestors will preclude him from the Junior World Cup in Manchester in June but there are no such restrictions in the Under-20 Six Nations. A sharp, elusive runner - check out his try-creating break against Ireland Under-20s last week - he is an unlikely bridge-hopper, having grown up in Loughor and played for Waunarlwydd from the age of eight until 16. It is alleged by some in Wales that an agent proposed he try his luck at Hartpury College, which shares its premises with Gloucester’s academy. Not so, according to Alan Martinovic, Hartpury’s director of rugby, who insists the player’s grandmother contacted him directly. “I can understand their chagrin but Mathew Protheroe wasn’t in any system or representative squad in Wales,” stresses Martinovic. “When his grandmother first contacted me, she told me he was on the verge of giving up rugby. She just wanted him to keep playing somewhere where he might get a fresh start. I’ve never had a conversation with any player that has involved persuading him to switch countries. This idea that we’re ransacking Wales for players is very wide of the mark.”

The 18-year-old Randall, even so, is another interesting case study. He grew up in Tycroes, attended Llandovery College, used to be a member of the Scarlets academy and won the man-of-the-match award in a 25-6 victory over England Under-16s in April 2013. His former rugby master at Llandovery, Iestyn Thomas, describes him in glowing terms: “He is one of the most outstanding young talents I’ve seen go through Llandovery College.” Given Thomas also coached George North in his early years that is no idle testimonial.

Randall’s parents, however, are both English, offering an alternative pathway after an apparent fall-out with the Scarlets academy. The young man abruptly quit his A-level studies at Llandovery and enrolled at Hartpury. Again, the college strongly denies luring him but the chance to join Gloucester’s academy seems to have been a motivation. “It’s a shame the way things turned out,” sighs Thomas. “I know Gethin Watts [the Welsh Rugby Union’s national performance manager] desperately didn’t want to lose him. I think they identified there was a real talent there but his mum and dad are English through and through. Harry’s always had a bit of the red and a bit of the white.”

Surely it must be a concern for the WRU if talented dual-qualified young players abandon their Welsh roots and try their luck elsewhere? Not necessarily, according to Watts. “Four or five years ago we had a problem with Hartpury and Filton College ... we were haemorrhaging kids to them. Back then we didn’t have good enough rugby and educational provision in Wales but that’s no longer the case. We also have an increasing number of English-based players who are Welsh-qualified.”

Among them is Botham, who was born in Cardiff while his father, Liam, was playing for the Blues. England, meanwhile, are keeping close tabs on Sam Underhill, the highly-rated young English flanker currently studying in Wales and playing for the Ospreys. Just as England will fight to the death to retain him, so Wales are hoping some of their exiles will come back. “We’d love all the Welsh players to stay in Wales but some of these players are making educational decisions,” says Geraint John, the WRU’s head of performance. “It doesn’t exclude them from playing for us. We’re making every effort to make sure we know who’s out there so we can stay a strong nation and be competitive on the world stage. If they come back, great.”

It would also help significantly, John suggests, if the eligibility regulations were standardised, particularly at Under-20 level to avoid Protheroe-type loopholes. “There is a case for saying they should be exactly the same. How can the Six Nations be different from a competition happening three months later?” How indeed. Small wonder many young players are hedging their bets rather than following their hearts.

The increased financial benefits for Premiership clubs who employ English-qualified players adds a further twist to the patriot game.

Martinovic - shortly to join Bristol as their head of recruitment - reckons all potential cross-border Gavin and Staceys should ask themselves one basic question. “It boils down to how comfortable you are standing there singing the English national anthem - or vice versa - when you’re playing against the country of your birth?”

If that fails to settle it, there is always the tie-breaker identified by the father of Huw Davies, the former Wasps and England outhalf: “I knew he would never play for Wales ... he’s tone deaf.”