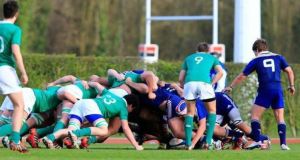 Ireland beat France 13-10 in the first of two Under-19 internationals between the countries at the French training base of Marcoussis, just outside Paris. They will contest a second international at the same venue on Saturday evening (6.0, Irish time).

Young Munster and Ireland fullback David O’Mahony provided all his side’s points with a try conversion and two penalties for the Peter Malone (head coach) and Kieran Campbell (assistant coach) guided side.

France led 10-3 at the break but O’Mahony’s 65th minute try and conversion, allied to a brace of penalties took Ireland into a lead they refused to relinquish. O’Mahony has played Ulster Bank League rugby for his side.

The Ireland team led by Paul Kiernan, a son of former Ireland centre Michael, and that included Jacob Stockdale and Andrew Porter who played in the Under-20 Six Nations were indebted to some fine individual performances including the backrow of Greg Jones, Neil Reilly and Max Deegan.

There was a double celebration when the Ireland Clubs U-18 team beat France U-18, 18-10 at Hartpury College in Gloucester in a triangular tournament. The Wayne Mitchell coached Irish side scored tries through captain, Conor Farrell and Paul Boyle. Luke Carty kicked a conversion and penalty while Ciaran Frawley also kicked a penalty. The Irish side will take on their English counterparts at the same venue on Saturday (2.0).

The Ireland Under-18 Schools side will hope to avoid finishing in eighth and last place - there is some uncertainty about whether that would see them relegated to Division Two of the FIRA AER Championships - when they face Scotland in Tournefeuille (11.0am) on Saturday.