‘For us, this is just a start but it’s a very good one’ - former Irish fullback delighted with win 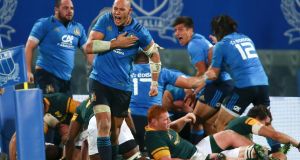 Italy claimed their first victory over South Africa on Saturday, stunning the southern hemisphere giants 20-18 in Florence in what visiting coach Allister Coetzee called the darkest moment of his career.

A delirious home crowd gave their team, ranked 13th in the world, a standing ovation after the match as the fourth-ranked visitors formed a lonely huddle mid-pitch, reviving memories of their shock loss to Japan in last year’s World Cup.

Both sides scored two tries, but Italy fed off repeated South Africa mistakes and grew in confidence as the game wore on.

“I am extremely proud,” veteran Italy captain Sergio Parisse said, calling it the best day for Italian rugby as the team continued their adventure under new coach Conor O’Shea.

The Irishman, supported by former England international Mike Catt as attack coach, has taken Italy back to basics, raised the intensity of training and adopted bold new tactics.

“For us, this is just a start but it’s a very good one,” O’Shea told reporters.

His South African counterpart Coetzee, facing mounting calls for him to be sacked, described it as embarrassing.

“It’s the darkest moment of my coaching career,” Coetzee told a news conference as his stony-faced captain, Adriaan Strauss, a cut above his left eye, stared into mid-air.

“For us there is a mountain to climb and as a group we have to take full responsibility,” he added.

Asked if he should quit, he suggested South African rugby authorities would decide his future and said he still felt he had a role to play to rebuild.

“I still think so,” he said. “I don’t think I have lost the changing room.” He seemed lost for words as to why South Africa had failed several times to score when the try line beckoned.

South Africa, coming off a heavy defeat by England last weekend – their first loss to their opponents in 10 years – seemed intent on register an emphatic win, opening with a try to Bryan Habana and turning down chances to kick penalties.

But their game was riddled with errors as they passed balls into touch, failed to penetrate with their rolling maul and spilled the possession deep in Italian territory.

Italy never went away, threw themselves into tackles and defended their line fiercely. They matched South Africa in the scrum and showed them up in the maul.

From there, the lead see-sawed as centre Damian de Allende ran in a second try for the visitors and Italy hit back with winger Giovanbattista Venditti touching down with barely 20 minutes to go.

Italy had a try disallowed in the dying moments of the match, but by then a famous victory was secured thanks to an earlier penalty goal by Carlo Canna.