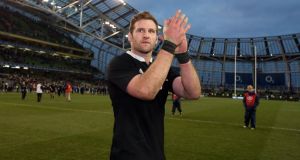 All Blacks number eight Kieran Read has been named player of the year for 2013. Photogrpah: Dan Sheridan/Inpho 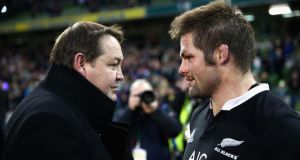 All Black coach Steve Hansen (left) talks with captain Richie McCaw after their 14th win of the year in Dublin last month. Hansen was named coach of the year by the IRB. Photograph: Phil Walter/Getty Images

After conquering all before them in 2013, New Zealand have swept the boards at the IRB awards once more, taking away all three major end-of-season prizes announced on Tuesday.

Read beat off competition form Eben Etzebeth (South Africa), Leigh Halfpenny (Wales), Sergio Parisse (Italy) and compatriot Ben Smith (New Zealand), but there was only ever one winner after the dynamic 28-year-old backrow came of age in a memorable 12 months.

His coach Steve Hansen, after guiding his side to an unprecedented perfect year (14 wins from 14) that culminated in that heart-stopping two-point victory in over Ireland in Dublin last month, has retained the coach of the year award, following the back-to-back wins of his predecessor Graham Henry. The last non-Kiwi coach to win the award was Ireland’s Declan Kidney in the Grand Slam year of 2009.

Similarly, the team award was a foregone conclusion and also extended New Zealand’s uninterrupted run to four, with South Africa in 2009, 2007 and 2004 the only other team to win it in the last 10 years.

“The IRB player, coach and team awards bring the international Rugby year to a close and what a year it has been for New Zealand,” said IRB Chairman Bernard Lapasset. “They seem to reach new levels of excellence every year and although some managed to push them very close, they were clearly the stand-out team of the year.

“From a starting point of brilliance, Kieran Read has been improving steadily in recent years and is now, without question, a world-class player. His talent, work ethic and attitude make him an extremely valuable player for New Zealand and a formidable opponent for everyone else. Winning this award reflects a magnificent contribution to our game during 2013.”

Hansen said Read’s award was “well deserved”, adding: “He has been outstanding and has been a major contributor all season. It’s been a big year and I am incredibly proud of what the boys have achieved. I thank them for their commitment and efforts throughout the year.”

Previous winners of the IRB Player of the Year Award

Previous Winners of IRB Team of the Year Award

Previous Winners of IRB Coach of the Year Award