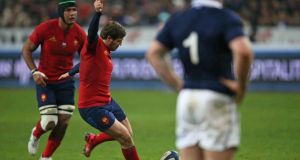 Camille Lopez kicked 15 points as France ground out a 15-8 win over Scotland at the Stade De France. (Photograph: INPHO/Billy Stickland) 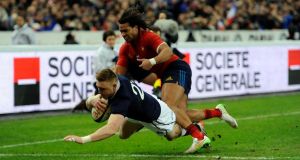 Dougie Fife scored Scotland’s only try as they were beaten 15-8 by France in their Six Nations opener at the Stade De France. (Photograph: Andrew Matthews/PA Wire)

France looked set for a difficult Six Nations campaign after labouring to a 15-8 home win against Scotland in their opening game on Saturday.

Philippe Saint-Andre’s side, playing in unfamiliar red jerseys, scored all their points through Camille Lopez’s boot while Scotland, a more formidable team since former Clermont coach Vern Cotter took over last year, had Dougie Fife to thank for a superb first-half try.

Greig Laidlaw scored one penalty for the visitors, who could have beaten France in Paris for the first time since 1999 had they handled the ball better.

France are second in the standings behind holders Ireland who beat Italy 26-3 earlier on Saturday and ahead of England, third following their 21-16 victory against Wales on Friday.

“It’s a win but we should have done better,” Saint-Andre told the BBC.

“We spent a lot of time in the Scottish half but we did not show enough variation in our play and Scotland played with a lot of spirit.

“They are a good team. They have good footballers and a great coach so I think the future is bright for them.”

South African scrumhalf Rory Kockott was handed his first France start in the absence of the injured Sebastian Tillous-Borde but he was replaced by Morgan Parra before the hour after an unconvincing display.

Lopez put France in front with an early penalty but they wasted their possession with useless kicking and Laidlaw levelled with a penalty.

But with plenty of ball to play with, the hosts, who finished a poor fourth in the championship last year, were the more dangerous side and Lopez slotted a second penalty after Scotland were sanctioned for offside.

Stuart Hogg danced past two tacklers to come within inches of a try but was stopped by Scott Spedding. Scotland continued to press but the French defence tightened things up and forced Finn Russell to a weak drop goal attempt, which went wide.

Lopez’s third penalty from as many attempts after another offside gave France a six-point lead, but Scotland finally found some space to cut the deficit to one point on the stroke of halftime.

Hogg’s run down the left flank put the French defence off balance and Scotland played it wide onto the opposite side where Teddy Thomas was outnumbered and could not prevent Fife from diving over.

Another Lopez penalty gave France some breathing space early in the second half but the flyhalf’s boot was all they could rely on even if his following attempt hit the post and went wide.

Scottish forward Johnnie Beattie picked up a yellow card for pulling down a moving maul just after the hour.

Yoann Huget made progress towards the line and escaped Hogg’s tackle but knocked the ball on as he wqas about to hand France a try.

Scotland continued to play with ambition to the end but were let down again and again through poor handling.

“We had chances but we didn’t take them,” said Russell.

“It was a good try to score, just before the break and if we could have come out and backed it up we could have won but we made too many mistakes.”

France travel to Ireland, whom they will face at the World Cup later this year, next Saturday, and Scotland will take on Wales the following day.

Betfair discontinues its association with Gordon Elliott 13:58
Ireland release 13 players for interprovincial clashes 13:38
Former Barcelona president Bartomeu arrested after club offices raided 12:41
Echoes of Berlin 1936 . . . Should Beijing Winter Olympics be boycotted? 10:01
The Offload: Ireland women must be allowed to move with the times 10:00
Crossword Get access to over 6,000 interactive crosswords