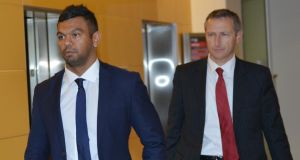 Former Australian Rugby Union official Di Patston said she felt “degraded” and considered suicide after being sent an offensive text message by Wallabies back Kurtley Beale, she told The Australian newspaper on Monday.

Beale was fined A$45,000 (€31,000) by an independent tribunal on Friday for sending a picture of a naked, obese woman labelled “Di” to Patston last June after mistaking her number for that of one of his team-mates.

The 25-year-old escaped having his contract torn up because the tribunal was unable to establish conclusive evidence he had been responsible for a second picture with an even more offensive message.

Patston, who was Wallabies team business manager until she resigned two weeks ago, said the affair had brought her to the lowest point in her life.

“They were both of very obese women in a very derogatory way. I am overweight and they were both naked with everything exposed.

“He doesn’t know my background. I’ve had an ongoing illness myself and I’m on medication.

“There’s a whole story behind it . . . I actually sat at a table and cried for an eternity because I didn’t know who to tell because I’m so embarrassed by this. Is this what people think of me?

“People don’t see that side of it. They don’t see there’s a level of feeling degraded, feeling like you’re worthless.

“I’m not good. Life is probably the worst it has ever been. I’m alive but there have been times I haven’t wanted to be here.”

Patston had been brought into the Wallabies set-up by former coach Ewen McKenzie, who she worked under in his previous post at the Queensland Reds.

McKenzie also resigned during the saga, having been forced to deny at a news conference that he and Patston were involved romantically.

Patston said she had originally accepted an apology and a hug from Beale over the message and promised to keep the incident under wraps.

She told The Australian that the agreement had been reached on the understanding he had not sent the message to anyone else – an understanding that she said had been contradicted in his testimony to the tribunal, which she had seen.

“Even as I was cuddling him, he said ‘I promise you, Di, I haven’t sent this to anyone’. When I read his statement, I can tell you I relived it all again,” she said.

“It’s like he played me for a fool. If he had said to me it was the second time he did it in the matter of seven days, no way, absolutely no way, would I have just said ‘That’s okay’.”

The ARU were made aware of the messages after Patston and Beale clashed on a flight between South Africa and South America last month when she asked him to change his T-shirt.

Beale, who has played 47 times for Australia, told local media on Sunday that he felt “vindicated” by the tribunal because he had “never told anything but the truth”.

He was cleared to resume his Test career but new coach Michael Cheika, his mentor at the New South Wales Waratahs, decided against bringing him over to Europe for the November tour.