Allister Coetzee: Victory over Ireland a highlight of my career

‘It’s quite an extraordinary win against a quality Irish side’ 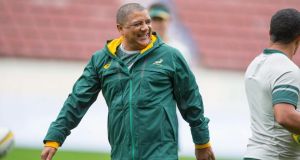 The Springboks have relocated to Port Elizabeth with a palpable spring in their step and in sharp contrast to an Irish squad who are facing into the last week of a prolonged World Cup season and returned to the training ground this afternoon.

For South Africa head coach Allister Coetzee, this also marked a homecoming, as he both played here for Eastern Province in his days as a scrumhalf, and began cutting his teeth as an assistant coach at the province as well when he retired in 1996.

Welcoming the sunshine of this coastal city, he added: “Definitely it’s lovely to be back in Port Elizabeth obviously, and also good to know that we’re still in the contest of the series. We’re playing to win the series down in Port Elizabeth. That makes it extra special.”

The Springboks’ comeback from a 26-10 deficit in the final quarter in Johannesburg last Saturday had given Coetzee his first Test win as a coach and both the win and the manner of it had clearly provided him with one of the highlights of his career.

“It’s been very pleasing to be honest. It was actually one of those special moments in a coach’s career where you’ve been looking into the barrel and players can turn it around like that, and just the belief that was still alive in the team, it was special. The belief in self, the belief in the plan and they all came to the party.

“It’s quite an extraordinary win against a quality Irish side, a side that has played together for some time and a side that knows how to put the squeeze on, and yet when our ball carriers started to carry with pace, running at the opposition with nice, good body height. We sort of got huge momentum. I think they couldn’t handle that well and that’s when we got confidence and got in behind them. So it was a really pleasing turnaround for us.”

The Springboks are awaiting medical updates on their two number eights, Duane Vermeulen and his try-scoring replacement last Saturday, Warren Whiteley, who sustained elbow and shoulder injuries respectively, as well as prop Trevor Nyakane, who suffered an ankle injury.

While outhalf Pat Lambie has again been ruled out of the third Test with concussion, the other player sidelined for last Saturday’s second Test, lock Lood de Jager, is undergoing physiotherapy and a decision on his availability will be made later in the week.

As to whether the Springboks’ senior players had failed to deliver big performances to date, Coetzee bridled a little at the outset of a long answer which began with him making sure any blame game for the opening defeat and error-ridden first 50 minutes or so against Ireland should be collective.

“If we have let anyone down it’s all of us, including the coaching staff. We’ve said it from the outset, if we don’t see it (leadership) and that transpires on the field then it must be a lack of understanding the detail. It might be a lack of pressure and on the expectation that’s out there for a lot of players playing in their first start or having been with the Boks but now starting.

“The experienced players understand they must lead by example, there’s no getting away from that. I said that and I’m a guy who believes in second chances and I’ve done that and some of them have taken that on and played well and contributed to the result.

“I’m of the opinion that I look at the challenges that the Irish bring this weekend and I must make sure I select a team that can front up and combat those challenges. It’s not just about senior players, we’re quick to use something and just chuck it out and start with some untested new thing which we have an opinion about.

“I’ve been in this business for some time and I know that I need to get players to perform. How do I get players to perform? By just dropping them and letting the other players know ‘jeez, I’ve got to come play now in this one opportunity, for myself’, and we start becoming an individualistic team? No. Players must have the confidence and I need to bring that confidence, make sure they have that confidence to perform as a unit.

“So senior players will be better. Everyone will have to be better. I’d like us to start well from the onset and more accuracy and discipline in our game and once we’ve kept continuity and we’ve cut out the unforced errors we’ve got momentum.

“It’s not easy but it’s difficult to play against us because we do ask questions with our attack now, I’m really comfortable with our set-piece. I think we can maybe improve on our exits because that is where they really put the squeeze on us. We just need to be accurate there.

“But a young nine (Faf de Klerk), his second cap and a ‘10’ (Elton Jantjies), who has never started, are learning and growing. But it’s not just the nine and 10’s responsibility to make sure you accurately exit. It’s the team’s responsibility to make sure. I want to see guys in motion, keeping defenders honest, preventing them from putting pressure on Elton and that’s the whole team’s responsibility. I want to see guys work harder and show workrate and make sure that ruck is taken care of and there’s no unnecessary pressure on the kicker.

“So as a collective, yes, we have to improve and get better in most aspects of the game.”