Gerry Thornley: Was Seán O’Brien right to speak out? 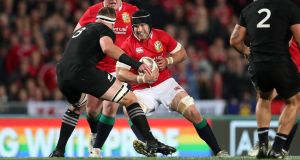 Sean O’Brien in action during the second Test win for the Lions over New Zealand in Wellington. Photograph: Billy Stickland/Inpho

Seán O’Brien certainly grabbed and hogged the headlines last week. It was no surprise that his surprisingly and unusually frank critique of the Lions coaches for their training preparations in the build-up to the first and third Tests generated such traction.

Increasingly in the modern professional game, players are conditioned to play media days with the straightest of bats. So it would be a little rich to criticise O’Brien for bucking this trend. Indeed, there was something very commendable about the way the Tullow Tank vented his frustrations over the Lions failure to win the series.

It certainly provoked a debate and one takes O’Brien’s point that such ‘positive feedback’, as Clive Woodward was wont to describe it, won’t have an impact. While many within the Lions hierarchy and elsewhere might have preferred it if O’Brien’s complaints were kept in-house (some former Irish internationals have been very taken aback as to what O’Brien’s surprising critique can achieve) in truth his public airing of them will probably have a bigger impact.

On the question of O’Brien citing a supposed ‘triple day’ on the Thursday before the first Test in Eden Park, this is disputed by the Lions, with the morning weights’ session described as ‘optional’ before the forwards and backs had separate unit sessions. There then followed the full session in the afternoon at the QBE Stadium in Albany.

Warren Gatland conceded in the fall-out from the second Test that they had erred by slightly over-training the Lions’ players on the week of the first Test, and that Thursday in particular, and along with a myriad of other factors, such as the unrelenting intensity of the tour, contributed to some of them being a little heavy-legged in that first Test defeat. So O’Brien has a point, and one that Gatland had to some degree already admitted.

The lighter preparations for the second Test were, all agreed, pretty much spot on, and not only may have contributed to that win in Wellington but also to GPS statistics which showed that, most unusually, the Lions players numbers increased in the final quarter.

As for the week of the third Test, O’Brien reckons the Lions would have been better off only having Sunday (a travel day from Wellington) and Monday as rest days, before resuming training in Queenstown on the Tuesday, and then taking Wednesday, a travel day, off.

Gatland and co felt that to maximise the off-tour detour to the delights of Queenstown, the squad were better served having a clean three-day break from all things rugby, before having a Wednesday-Thursday-Friday run-in to the third Test. The Thursday was confined to one session of 47 minutes, and that included the warm-up. Hard to see how you could draw, much less beat, the All Blacks on anything less.

Over-training players in the build-up to a big game is not that remarkable. Good sources have suggested the same happened to Leinster in the week of their Guinness Pro12 semi-final defeat against the 14-man Scarlets at the RDS. Likewise, this column has been informed by a good source that the English coaches ticked too many boxes in the week of their Six Nations finale away to Ireland, which they lost.

It happens. It will happen again.

However, what has grated most with the Lions hierarchy was O’Brien naming Rob Howley in claiming he struggled to get his message across. In the long-term, such a rare quote from a high-profile player concerning a high-profile coach is damaging to Howley’s coaching career.

Then, of course, there is perhaps O’Brien’s most contentious call of all, namely that the Lions should have won the series 3-0. The weight of history, both ancient and modern, rather flies in the face of that viewpoint.

This was the Lions’ 11th tour to New Zealand, and they’d only ever won one series, by 2-1 with the fourth Test also, ironically, drawn in Eden Park. That’s it. The only time the Lions have ever won a series in New Zealand.

To further put the Lions’ 24-21 victory in the second Test in the Westpac Stadium into perspective, it was the All Blacks’ first home defeat in 2,849 days, ending their 47-Test unbeaten run on home soil, going back to their 32-29 Tri Nations defeat in Hamilton to South Africa in 2009.

It was the Lions first victory over the All Blacks since the second Test in 1993 - also in Wellington. It was only the All Blacks’ third ever defeat at Westpac Stadium – the last being against England in 2003, since when they’d won 16 Tests in a row there.

There was also the small matter of the All Blacks being the most dominant team in the history of professional rugby, having become the first country to win back-to-back World Cups.

For sure, O’Brien is entitled to believe that this had been an opportunity lost, and certainly one the like of which will never come around in his career, or for his squad mates, ever again, save possibly for Maro Itoje.

O’Brien played some of the best rugby of his career, and gave it everything.

But 3-0? Considering the Lions only led for three minutes in the entire series, the last three minutes of the second Test, drawing the series looked a commendable achievement. Consider too that the All Blacks won last year’s Rugby Championship with six bonus point wins out of six, and have done so in three of their four wins to date, the most recent being a record 57-0 win over a South African team unbeaten in six games.

Hey, everybody is entitled to their opinion, and rugby has always been a little too heavy-handed with players for stepping out of line. Rugby is all about opinions. It’s just that sometimes we don’t have to agree with them.