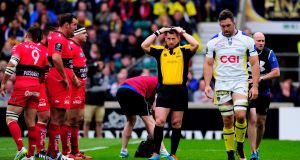 Jamie Cudmore of Clermont leaves the field early in the first half of the 2015 Champions Cup final due to concussion. Photo: Stu Forster/Getty Images

The fifth International Consensus Conference on Concussion in Sport will be held in Berlin at the end of this month and it is clear that rugby will be under considerable scrutiny, and specifically, the adequacy of the pitch-side HIAs (head injury assessment) and the return-to-play protocols.

This follows the second case of a player recently taking legal action against his club for medical negligence. Jamie Cudmore has instigated legal action against Clermont Auvergne for what he claims were breaches of the HIA which resulted in him returning to play despite failing a concussion test.