Gerry Thornley: Rob Kearney deserving of some kind of send-off 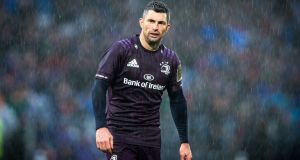 Some guys get all the luck, or at any rate the perfect farewell. Brian O’Driscoll, obviously, signed off his Test career in the Aviva Stadium with that enormous banner and man-of-the-match award, to be followed by Ireland sealing the 2014 Six Nations in Paris a week later. He was so good he pretty much scripted it himself.

Even when O’Driscoll departed in the eighth minute of his very last match of all, Leinster’s Pro12 final win over Glasgow at the RDS two and a half months later, he was still able to join in the celebrations in front of his home crowd and was again serenaded with chants of “one more year”. Leave them wanting more!

1 Aaron Brady, the man who said with pride he was a cop killer
2 Aaron Brady found guilty of capital murder of Det Garda Adrian Donohoe
3 A year after Nóra Quoirin’s body was found, her parents still believe she was abducted
4 State to investigate claims of bogus employment practices in meat sector
5 A chronicle of dignity and despair
6 Kamala Harris targets Trump’s ‘failed government’ in first event with Biden
7 Newton Emerson: The North’s attitude to university fees is causing a brain drain
8 Moving in and out of lockdown is a recipe for economic disaster
9 Staycationing just means paying too much to sleep in someone else’s uncomfortable bed
10 Seat’s new Leon: It’s now better than the VW Golf it’s based on
11 Case of Covid-19 confirmed at community creche on UCD campus
12 Coronavirus: How Germany dealt with a meat plant outbreak
13 Gardaí are confident others will face justice over killing of Det Adrian Donohoe
14 We emotionally reticent Irishmen would be even worse without sport
15 Boris Johnson to meet Taoiseach during Northern Ireland visit
16 Two-bed cottage in Terenure Village for sale for €495,000
17 Stripe lures Dhivya Suryadevara from General Motors to be CFO
18 Guiding young Irish women, who lack representation in Stem fields, all the way to world finals
19 What is the point of public art if the public does not like it?
20 The chickpea stew that broke the internet in the US is here. Give it a go
21 Exiled Seán O’Brien not ruling out a third Lions tour
22 Covid-19: Just 983 people have self-isolated at 750-bedroom Citywest hotel
23 Kamala Harris is the future, so Mike Pence may well be history
24 A play about sex work: ‘I want people to come out of the theatre angry’
25 Netflix has revealed its most-watched content. You might be surprised
26 Coronavirus: 40 new cases and one more death confirmed by Nphet
27 AIB concedes Covid mortgage policy was ‘regrettable’
28 Gardaí find potential breaches of Covid-19 rules in 14 pubs over past week
29 Three dead after train derails in floods-hit area of Scotland
30 Worsening eye sight doesn't stop for Covid, neither did we
31 Planning a move to New Zealand? Here’s everything you need to know
32 Maureen Gaffney: Why and how do we fall in love?
33 The pseudoscience of creating beautiful (or ugly) water
34 Look to lichens for dating with a difference
35 Welcome to Sligoville: The story of the Irish in Jamaica
36 Stephenie Meyer on Midnight Sun: ‘This was just a huge, pain-in-the-butt book to write’
37 Mr Salary – a short story by Sally Rooney
38 Revamped 1980s Sandymount redbrick seeks €950,000
39 In Oz, Marianne would have told Connell: ‘Get stuffed, you gutless wonder’
40 Brutalist beauty in Brittas for €495k
Real news has value SUBSCRIBE