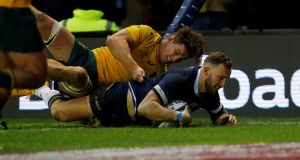 That sets up the Six Nations pretty nicely. For the four home countries especially, November marked a month of progress. True, in a dozen matches between teams from the Six Nations and the Rugby Championship, the former had five wins to the latter’s seven, but extract Italy’s defeats and New Zealand’s wins, and the tally was 5-2.

Like New Zealand, Ireland and England came through the month unbeaten, the Scots finished it off with that eye-catching, record rout of the Wallabies, and like the latter three Wales unearthed several more players at this level while evolving their style.

1 Gardaí investigating four-lane motorway sulky race
2 A Russian cruiser with ‘cannibal rats’: What other ‘ghost ships’ could be out there?
3 Dublin schoolboy (14) appears in court charged with rape
4 Grave concern in North over London’s new immigration rules
5 At least eight shot dead in German town of Hanau
6 Expert tips: A dentist on how to have perfect teeth
7 Woman sues over catching Legionnaires’ Disease in luxury hotel spa
8 Martin tells party government may not be formed until April
9 DUP pleads with UK to reduce salary threshold for migrant workers coming to North
10 I’m happy I went vegetarian. I have no desire to eat meat again
11 Newton Emerson: Martin and Varadkar must set out terms for Sinn Féin
12 Galway development could transform skyline with 21-storey tower
13 Paraic O’Donnell: MS is meticulously destroying me. I am being unmade
14 Council to refuse applications for Airbnb-style short-term Dublin lets
15 ‘If all the immigrants go back, who will work in the meat factories and do the crap jobs?’
16 Fine Gael should swallow its pretend humility
17 Jim Mansfield Jnr denied permission to attend mother’s birthday party in Spain
18 I’m worried about my neighbour’s new ‘shed’ and what he intends to use it for
19 Person claiming to represent ‘ghost ship’ owner comes forward
20 Walk for the Weekend: Rambling on the white sands of Inishbofin, Co Galway
21 Love Island tribute to Caroline Flack hides the truth
22 Jewish council dismayed at Sinn Féin TD’s ‘unacceptable’ tweets
23 Letter from Caroline Flack describes inner turmoil as inquest opens
24 How can I view my dead brother’s will if I’m not the executor?
25 Netflix has revealed its most-watched content. You might be surprised
26 Miriam Lord: Photo-ops give way for occasional talks
27 Investigation into how son of bankrupt came to own father’s property
28 ‘Exposure doesn’t pay bills’: What artists say about freebie culture
29 Ireland keep same line-up but Bono and Paul O’Connell join backing band
30 Australian bush fires were not caused by climate change alone
31 How is UK changing immigration system and how will it affect Ireland?
32 Toyota C-HR: A proper premium hybrid crossover that’s a halfway house to electric
33 ‘Bring several shirts’: EU leaders set to dig in for lengthy budget talks
34 Department denies asylum seekers leapfrogging social housing lists
35 No hospital bed for adult son ‘threatening to kill’ parents, court told
36 Gordon D’Arcy: Digging deep only recipe for Twickenham success
37 Ex-MI6 man says Diana's driver was an agent
38 America at Large: Jimmy Conway’s legacy marked from Cabra West to Portland
39 The Irish Times view on the UK’s migration rules: crude and self-defeating
40 Inglorious Empire: what the British did to India
Real news has value SUBSCRIBE