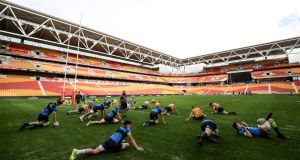 Brisbane is buzzing, primarily with the State of Origin, and so also in mild shock after the Blues beat the Reds in the series opener in Melbourne last Wednesday by 22-16. But today union took over, if only for a day.

Watching the first Origin game in a casino in Surfer’s Paradise may or may not have been a barometer, but with so many fans from Sydney having moved there, it was surprising to see so many Blues shirts mixing with the maroon of the Reds.

1 Seán O’Brien: Anger over my parents’ break-up has never left me
2 Why Waterford is ‘the best Covid county in Ireland’
3 Sinn Féin’s stand on Covid is facing increasing questions from political rivals
4 ‘In 2018 I wrote publicly about my heritage. Soon after, the anti-Semitic messages began’
5 Two hundred Irish retailers for all your online Christmas shopping
6 Coronavirus: Close contact numbers fall in sign restrictions may be working
7 Roddy Doyle’s Nurse – an exclusive new short story
8 Covid-19: Trump goes on defensive as Biden claims president has ‘quit on America’
9 David McWilliams: Lockdown decision makers still get paid. Those they shut down do not
10 Gardaí find ‘fully operational bar’ after visiting suspected shebeen
11 Late Late Show: In Covid-19 Ireland, Tony Holohan is bigger than Bruce Springsteen
12 Fintan O’Toole: Donald Trump’s campaign has a joyful new message – ‘I’m alive!’
13 Cab investigates behind the massive gates of Chosen Few Motorcycle Club in Dublin
14 Martina Cox: ‘In my eyes, Seán was always coming home’
15 Covid-19: Public advised to stop using all Virapro sanitary products
16 ‘Afraid, frozen, stuck’: The mental health pandemic and how to fight it
17 Putting the clocks back: Sleep experts question benefits of not changing time
18 Retailers accused of ‘stealing business’ from rivals by flouting restrictions
19 Coronavirus search: How is Covid-19 spreading in your locality?
20 Q&A: Mother and Baby Homes Commission database
21 We need to reverse our thinking on lockdown
22 Love in a time of Covid: John and Mary marry over 40 years after first meeting
23 Sacha Baron Cohen: ‘I had to ring the alarm bell and say democracy is in peril’
24 Phil Hogan has reason to be aggrieved over von der Leyen’s Covid quarantine trip
25 I can hear the old dear’s hysterical voice going, ‘Better men than you have eaten my one-pot stews!’
26 Pint lovers may be spinning at the notion: Conor Pope tries alcohol-free Guinness
27 Six Nations - Ireland v Italy: Kick-off time, TV details, team news, standings and more
28 Life under Level 5: Where can I go, who can I see, what is closed and what is open?
29 Father unaware partner and baby dead until gardaí called to raise alarm
30 ‘Faith restored in people’, says director of nursing at Galway home after public appeal
31 Ireland out to make a bold statement of intent against callow Italian side
32 Ireland entitled to feel at home with sparing use of residency rule
33 Sophia Loren: ‘I never had a relationship with my father’
34 The baby black market
35 Coronavirus: US sets single-day record for cases during new surge
36 Drugs and gun seized amid arrest of John Gilligan in Spain
37 In praise of Gogglebox Ireland, an essential service in all but name
38 Dáil approves transfer of mother-and-baby home records to Tusla
39 Anatomy of a lockdown U-turn: Holding out against Nphet a gamble politicians unwilling to take
40 ‘Blanket’ ban on mother and baby homes data access contested
Real news has value SUBSCRIBE