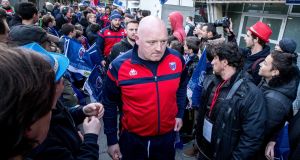 More Irish coaches are cutting their teeth abroad than ever before, and with Anthony Foley and Leo Cullen heading largely indigenous tickets at Munster and Leinster, they’ve never been so numerous hereabouts either. Arguably the pick of the bunch this season has been Bernard Jackman.

Not alone has the ex-Connacht and Leinster hooker guided Grenoble to their first semi-final in a European competition by dint of last Saturday’s epic quarter-final win over Connacht, they are safely ensconced in eighth place in the Top 14, just seven points outside the top-six playoffs and automatic qualification for next season’s European Champions Cup via the league.

Jackman, with the help of backs’ coach Mike Prendergast, has helped to transform Grenoble into a free-running, offloading team on the safe premise that they are rarely going to bully the bigger teams, but a la Connacht with Pat Lam at the helm, can perhaps instead outwit and outflank them.

This has also made them one of the better French clubs to watch. Mentally they’ve changed too, and while losing four of 10 at home, they’ve also won four of 10 away.

Only three of the top four, Clermont, Montpellier and Toulon, have scored more points than Grenoble’s 503 in the Top 14 this season; while unsurprisingly, only the doomed duo of Oyonnax and Agen have conceded less than Grenoble’s 548.

Of course the Challenge Cup winners automatically qualify for next season’s Champions Cup, thus giving Grenoble a second route into that competition. But reaching a cup final, or winning a major trophy, would constitute a serious legacy for Grenoble and for Jackman. For a club without a benefactor, crowd support is key, and reaching a final an hour’s drive away in Lyon would spark huge travelling support.

After Saturday’s game, Jackman spoke of this squad trying to create its own legacy, akin to the so-called Grenoble “Mammoths” of the early 1990s. Guided by Jacques Fouroux, who took control of the team for the 1992-1993 season, Grenoble’s pack of mountain men dominated teams with their maul and scrum.

They reached the final too, but were beaten 14-11 by Castres, despite overpowering them up front. Grenoble were forever aggrieved that a try of Olivier Brouzet was wrongly ruled out, while Castres’ match- winning try by Gary Whetton was awarded by the referee, even though Grenoble’s Franck Hueber won the touchdown. The referee admitted the error 13 years later.

Since then, Grenoble have had a fairly undistinguished history. At the end of 2004-2005 they were relegated to the Pro D2 on the pitch, and dumped another flight, to Fédérale 1, after an audit of the club’s books revealed debts of €3.64 million.

Promoted back to the ProD2 the next season, Grenoble finally returned to the Top 14 in 2012 , finishing first to gain automatic promotion (having missed out on the playoffs three years earlier).

Meantime, in keeping with a playing career that saw Leinster belatedly bring the Tullow-born hooker home from the second of two three- year spells with Connacht (interrupted by a two-year stint in Sale), Jackman has had to do the rounds to earn his stripes as a coach.

After spells coaching Tullow, Newbridge, Coolmine and Clontarf, Jackman moved to Grenoble on a full-time basis as their assistant/forwards coach in 2012-2013 after previously being hired on a consultancy basis as a skills and forwards coach.

It was a brave move, and one that is reaping a handsome reward, with Jackman assuming the role of head coach. As Michael Cheika can readily testify, France can be an unforgiving and often unreceptive place for foreign coaches. Cheika’s methods may have been good enough to guide Leinster and the Waratahs to the Heineken Cup and Super 15, as well as Australia to a World Cup final in his first year at the helm, but they weren’t good enough to survive the political maelstrom at Stade Francais. Ditto Eddie O’Sullivan at Biarritz, where a mass player exodus and trimmed budget handicapped him.

Although the Argentinian Gonzalo Quesada is in charge there now, his playing career was in French club rugby. Other than Quesada, Jackman is the only non- French head coach in the Top 14.

Money talks in rugby like never before, and particularly so in France. Grenoble’s budget of €21 million is, by Top 14 standards, a mid-table budget in keeping with their standing. And of course it dwarfs that of Connacht’s, at about €6 million, which meant their greater financial and playing strength should have seen Grenoble beat a team containing three members of the Connacht academy (Seán O’Brien, Peter Robb and James Connolly), and two more recent graduates of same in Ultan Dillane and Finlay Bealham.

Jackman has always made sensible contributions on radio as a pundit, and being based in France has broadened his knowledge as a pundit as well as a coach.

Even more than with Cullen and Foley, Ronan O’Gara has always enjoyed an altogether higher profile than Jackman, but no less than O’Gara, Jackman clearly coaches a good game as well as talking one.

You’d wonder if there is something of a glass ceiling at Grenoble, for realistically it will always be tough for them to compete with the heavyweights in France. But Jackman’s CV is fast becoming as impressive as any other indigenous Irish coach currently on this tricky beat. gthornley@irishtimes.com

O’Sullivan up against it as Williams takes early lead 20:41
GAA permits clubs in Kildare, Laois and Offaly to reopen 19:35
World Rugby push back on extending residency rule 20:34
US PGA glory rests easy on Morikawa’s young shoulders 16:52
Jadon Sancho will stay with Dortmund, says sporting director 16:38
Crossword Get access to over 6,000 interactive crosswords