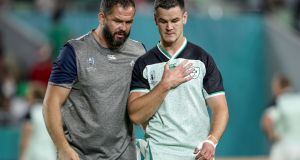 Andy Farrell with Jonathan Sexton ahead of the Russia game at the Rugby World Cup in Japan. Photograph: Dan Sheridan/Inpho

With the dawn of a new era under Andy Farrell, so the winds of change have swept through the Ireland squad for the 2020 Six Nations. It’s a similar story with other countries, but even so the absence of a dozen of the 33 players who featured in Japan and the inclusion of 14 who did not represents quite a significant overhaul.

After all, there have only been three injuries and one retirement, that of Rory Best, and in his stead, as expected, Johnny Sexton has been appointed captain. Having assumed that role for Leinster last season, it’s a fair reward for the 34-year-old.

He’ll relish the role, after leading his country for the first time in the World Cup pool win over Russia.

“I saw exactly what it meant to him,” said Farrell of that week. “He’s like a spring chicken, he’s unbelievably chuffed with being named the captain and he’s going to have some great people behind him, some great support. I look forward to working with Johnny closely now as head coach and captain. I’m sure that relationship is going to be great and we’ll push the team forward together.”

James Ryan’s time will come, besides which he can assume more of a role in calling lineouts in the interim.

Sexton’s appointment adds to the feeling he’ll be fit to take part in the week-long preparatory camp in Portugal from next Wednesday, and for the opening game at home Scotland on Saturday fortnight.

With Joey Carbery injured and the thrice-capped Ross Byrne and uncapped Billy Burns the other outhalves in the squad, it also suggests his presence in the team may be under less pressure than the other leading candidate for the role, Peter O’Mahony, who has led Ireland to nine wins in his nine games as captain.

That said, O’Mahony’s most established rival for the number six jersey Rhys Ruddock, who has captained Ireland to seven wins out of seven, is arguably the most surprising exclusion.

Aside from Best, Carbery and Ruddock, the others to miss out from the 33 who ultimately played in the World Cup are the injured Tadhg Beirne and Jack Conan, and Niall Scannell, Seán Cronin, John Ryan, Jean Kleyn, Jordi Murphy (who was a late call-up to Japan), Jack Carty and Rob Kearney.

It’s a tremendous group. It’s full of everything really

The winds of change are more apparent up front. For example, where it’s a case of as you were in midfield – with the same quartet chosen – it’s a new trio at hooker if one includes Rob Herring, who was the other late World Cup call-up. The uncapped Rónan Kelleher and Connacht’s Dave Heffernan have been chosen, and so at least one will feature against the Scots.

Jack McGrath is back, and the uncapped Ulster tighthead Tom O’Toole is surprisingly chosen ahead of Marty Moore. The return of Devin Toner and Ultan Dillane will be popularly received, and as with McGrath, Jack O’Donoghue’s form has been rewarded with a call-up despite not being in the December “mid-season stocktake”.

The clear message is that the door is not closed on anyone and that henceforth selection will be more fluid. So it is that in addition to John Cooney, Byrne and Burns, Dave Kearney and Will Addison have also been reinstated. That said, it looks a long way back for the latter’s much-decorated brother Rob, who has 95 caps for Ireland and 98 Tests in total to his name.

“Competition for places at this level is absolutely key and for some of the guys who are obviously upset, not quite happy with not getting into the squad initially, the message has been loud and clear for them – that we’ll be watching them play over the coming weeks to see what their form’s like,” said Farrell.

“That message will be loud and clear as well to the guys that are picked. This isn’t a World Cup where you pick 31 and that’s what you’re stuck with.”

Farrell stressed that this squad was picked on form and scarcely concealed his excitement. “You look at the group, it’s a tremendous group. It’s full of everything really. As I said before it’s dynamic, it’s powerful, it’s aggressive, it’s got a lot of skill, it’s got a lot of speed in there as well and we want to see all of those.”

Farrell has, by his own admission, taken a leaf from the provinces’ developmental pathway, and in the process emulated the All Blacks, by naming the uncapped quartet of hugely talented Leinster lock Ryan Baird, Will Connors, Harry Byrne and Robert Baloucoune as “development players” who will train with the squad in Portugal.

Ultimately though, whatever difficult choices Farrell and his assistants faced in trimming this squad down to 35, the harder ones remain.

At the very least, in addition to either Kelleher or Heffernan, Doris or Deegan look likely to be in the match-day 23 against the Scots and, of course, the burning issue will be whether to retain Conor Murray or promote the in-form Cooney at scrumhalf.

Joe Schmidt only ever had Bundee Aki, Robbie Henshaw and Garry Ringrose together on one occasion in the Six Nations, and resolved the conundrum by starting Henshaw at fullback, while Andrew Conway is assuredly putting pressure on Keith Earls and Jacob Stockdale, with Jordan Larmour now favourite to wear the 15 jersey.

Ireland’s fall-back captain probably feels he’s never been given much of a chance. Despite making his debut in 2010, Ruddock has never started a Six Nations game and although he looked in prime form in Japan, he was restricted to just one, tryscoring start, against Russia. He’d have hoped opportunity might knock now.

After the World Cup you’d have received long odds on the 28-year-old from Ballina edging out Scannell and Cronin as one of the three hookers for the start of the Six Nations. But it’s fair reward for the ultra-diligent, hard-working ethic and dynamic ball carrying he’s shown for Connacht this season.

Still to add to his impressive sole Six Nations cap against England four years ago and that midfield barn door looks even harder to break through for the 27-year-old Ulster man now despite how he’s added to his strong carrying offloading game with improved decision-making, passing and kicking this season.