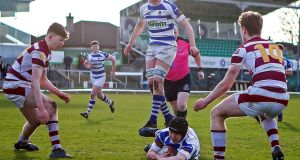 Oisín McCormack, Colm Reilly, Shane Jennings, Joseph Devine and Mannion all scored tries for the Ballinasloe outfit in the first-half.

They were 31-14 clear at half-time and two more tries followed after half-time with Mannion and Cathal Dolan crossing to score.

Gary Keane, Aaron Mannion and Jake Gallagher started for Coláiste Iognáid when they beat Garbally two years ago. And they also had seven of their starters from their 2017 final win over Summerhill College.

But the holders couldn’t find a way into the game early on, and they were over-powered by Garbally and their big backline.

McCormack was the first to score when he touched down after a kick through from Jennings. And Garbally found themselves 12-0 in front minutes later when Reilly scored a brilliant solo effort, which was converted by Mannion.

Coláiste Iognáid scored their first try in the tenth minute when Cathal Forde scored, and added the conversion to reduce the arrears.

Julius Byrne also scored for the Jes in the first-half but his try was cancelled out by three tries from Garbally.

Jennings scored after a quarter of an hour and Devine scored again in the 23rd minute. Mannion touched down his first effort just before the interval and they held an unassailable 31-14 lead at the break.

Keane scored in the 41st minute as Jes looked to launch a comeback but Mannion cancelled that out when he doubled his tally shortly after. Byrne and Dolan exchanged tries but Garbally powered to victory.