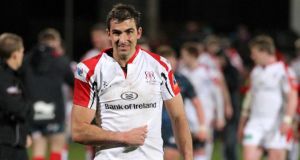 Ulster’s Ruan Pienaar goes off with a shoulder injury sustained against Scarlets in the Pro12 last month. Photograph: Inpho.


“He’s progressing, we’re hopeful that he’ll be ready to go,” says Mark Anscombe. The Ulster coach smiles and while his play-making scrumhalf Ruan Pienaar missed last week’s defeat to Cardiff, Anscombe finds a positive way of expressing that he is hopeful his Springbok won’t still be injured when Saracens arrive to Ravenhill on Saturday for Belfast’s biggest rugby match in years.

Pienaar is suffering from an unspecified shoulder injury that has kept him off the pitch for two matches allowing room for Michael Heaney, last week’s understudy and preferred by Anscombe over Paul Marshall.

Mistimed performance
“They are all hopefully going to be fit and available for selection,” adds the coach declining to harden up the odds of Pienaar making the pitch. After Ulster’s mistimed performance on the synthetic surface in Wales, the collective “they” also includes Stephen Ferris, Ireland’s most potent blindside flanker for years but making a competitive comeback after long-term injury.

There’s no doubt Ferris is not where he was and few would expect that after such an eternal spell on the sidelines. It makes the question over whether his body is yet ready for a full-throttle run in a Heineken Cup quarter-final. Again Anscombe is more hopeful than cast-iron certain.

“Good question,” he says. “We are hoping that he will get through what we need him to . . . you know to do a job because sometimes you may not necessarily be 100 per cent and be where you want to be.

The Ulster squad is in good shape relative to last year, when they were hampered by injury, although the season is shaping into something like the reverse of 2013.

Then a defeat of Leinster sent them hurtling towards the stars and Saracens at Twickenham. Defeat by the team of Ulster old boy Mark McCall stands as a lesson learned. Now it’s McCall again but this time at the ground he once called home.

“Well, the thing is that we’re in a healthy situation with injuries,” says Anscombe. “We’ve a couple of niggles, but everyone gets that. If you remember last year we had an horrific run and they all started coming back around this time of year.

“We went to Leinster before the Saracens game with Johann (Muller), Chris Henry, Nick Williams and Tommy Bowe all having their first game back. We had four or five big players who hadn’t played much rugby.

‘Surrendered meekly’
“We had a tough game down there, won it, but it took a lot out of them and we just surrendered meekly at Twickenham. But, I can assure you that’s not going to happen this Saturday.”

While Kiwi Anscombe may inadvertently plough a no surrender furrow, a steely attitude prevails and has served them well away and at home. Six impressive wins in the pool phase arrived with the scalps of Montpellier and Leicester.

Three of the senior players will also be leaving at the end of the season, Tom Court, Muller and John Afoa, so for this team, it may be their last chance to win something tangible. Last week in Cardiff was not a good advertisement for potential European Champions but it has at least straightened Ulster’s mental attitude facing into this quarter-final.

“It is individuals just getting it right. That’s a simple thing,” explains the coach. “The thing that disappoints is that it needs to be repeatedly brought up. Yes playing Cardiff the week before a big Heineken Cup game . . . of course it’s not the same intensity but you pick a guy to do a job and if you pride yourself on performance you will set a guide to the level, so that was disappointing.

“But we know that the guys with the experience that go out will be up for Saturday. You got to be excited by those challenges, enjoy and embrace them.”

And all the more so with Pienaar behind the scrum.

Against that, England’s Billy Vunipola is set to make a timely return for Saracens at Ravenhill.

The number eight has been sidelined for six weeks since suffering an ankle injury against Ireland in the Six Nations but the club are hopeful he will be fit for Saturday’s game.

1 Colin Kaepernick’s exile is too fresh for NFL to speak out on US protests
2 Royal Portrush: Golf clubs ‘in real distress’ as eyes turn to 2021
3 Rodgers shunned by some family members for leaving Celtic
4 Ken Early: Why international football is fading into obscurity
5 Fitzgerald says inter-county game should resume before club fare
Real news has value SUBSCRIBE