Toulouse are titans of French rugby but risk becoming also-rans 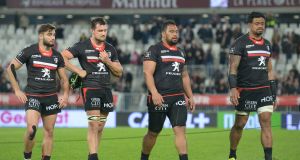 Toulouse have struggled to recapture former glories and are currently outside the top six for qualification for next season’s Champions Cup. Photograph: Nicolas Tucat/AFP/Getty Images

Stade Toulousain! The club is synonymous with winning and flair. No team has won more French Championships or European Cups. They also did so with a certain panache. They were the standard-bearers. They used to be beautiful. But not any more.

1 Bank leaked my loan request to family who tried to rip me off
2 A cardiac problem that could strike at any time
3 Investigation into Dublin housing charity launched
4 Irish health officials to ramp up precautions against coronavirus
5 Why Sinn Féin will not call the State by its name
6 Irish vet in Australia: I look at this wombat, snoring on my chest, the last I’ll raise
7 Maureen Dowd: For the White House parasite, all restraint has gone
8 McDonald rejects idea SF public meetings ‘an affront to democracy’
9 Coronavirus: Questions over Ireland’s readiness for what might come
10 Costa living: ‘Move home to Ireland? I’d hate it’
11 Harvey Weinstein verdict a watershed case for sex assault victims
12 Doctor Who landed in 1950s rural Ireland last night. The fiddles never stopped
13 Solar panels: How do they work - and are they worth it?
14 ‘He was angry and punched it about nine times’: Should you recline your airplane seat?
15 Garda warning after €500,000 of ‘movie money’ found in circulation
16 Six Nations: No place to hide for Ireland’s misfiring captain
17 Over $12m from sale of Walford handed over in Sean Dunne bankruptcy case
18 Mary McAleese ‘shocked’ and disappointed at L’Arche abuse revelations
19 Graduates not well-equipped for future workplace, say employers
20 Can you be racist against white people?
21 Dan Tuohy explains ‘rotten to the core’ comments
22 Europe grapples to rein in global spread of coronavirus
23 Steve Coogan: ‘Come Out, Ye Black and Tans is two fingers to the British’
24 It may be too late to stop Bernie Sanders winning democratic nomination
25 Coronavirus: ‘I’ve planned a holiday to northern Italy. Should I cancel?’
26 Contepomi says Leinster can learn lessons from nature of Ireland’s defeat
27 Graham Dwyer referral could delay over 2,000 child abuse investigations
28 An Irishwoman in Milan: ‘Everything that usually seems important suddenly isn’t’
29 Coronavirus: Irish citizens advised not to travel to Italy’s affected areas
30 A bit of heresy now and then does the Catholic Church no harm
31 EU and British positions harden ahead of Brexit talks
32 Trump offers India ‘most feared military equipment’ on planet
33 Ryanair and Aer Lingus monitor impact of coronavirus on travel to Italy
34 New man Marshall sees Shamrock Rovers past Waterford
35 Why Dr Seuss is the real hero of children's literature
36 My daughter is excluded from the friendship groups in school
37 Dozens injured after car ploughs into carnival parade in Germany
38 UK’s immigration plan geared ‘to catch headlines’
39 How Voronoi diagrams help us understand our world
40 The close links between Sinn Féin and IRA untangled
Real news has value SUBSCRIBE